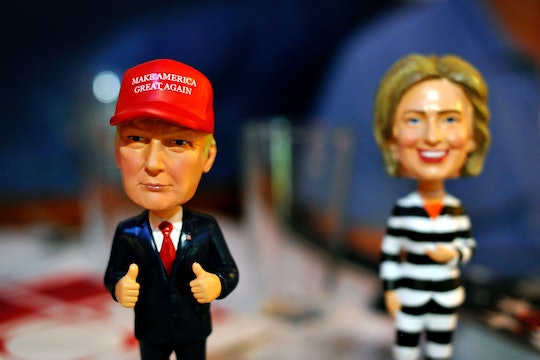 What Topics Will The Final Presidential Debate Cover? They're All Over The Place

The final presidential debate is next week, which means we are this close to the election season being over (whether that's a good thing or not, who knows). Given the way the past two debates have gone, next Wednesday's showdown between Republican nominee Donald Trump and Democratic nominee Hillary Clinton is bound to be heated. So it's a good thing that the Commission for Presidential Debates released the topics for the the final presidential debate ahead of the event so that both the candidates and voters can prepare themselves.

And prepare themselves they should. Debate moderator Chris Wallace came up with the topics, as directed by the CPD, and the Fox News anchor did not disappoint in choosing some interesting ones. They are: debt and entitlements, immigration economy, Supreme Court, foreign hot spots, and fitness to be president. All of those are bound to get a real debate (or screaming match) started.

Each topic will be broken into 15-minute segments and, as per the rules of other debates, each candidate will have two minutes to answer, rebut, and respond to follow up questions from Wallace. The topics that Wallace chose could lend themselves to a real discussion but they could also devolve into bickering, as some of them, like "fitness," "immigration economy," and the Supreme Court vacancy are all hot button issues for voters.

Literally, all of the topics are about major issues. But they lend themselves to a lot of partisan politics. The Supreme Court nomination, to replace the recently deceased Justice Antonin Scalia, is especially interesting, because it does matter who fills the seat so that the Court can actually make decisions. The Republican party has vowed to wait until a new president is in office, even though President Obama has nominated Merrick Garland. How Trump and Clinton answer that question could potentially sway undecided voters.

It's interesting that Wallace chose "fitness to be president," which will most likely give Trump a chance to talk about Clinton's "stamina" and her health, which dominated the news cycle early last month when the Democratic nominee came down with pneumonia. This is probably where the debate will devolve, given the way this election season has been going. It will, though, give Clinton a chance to take some shots at the Republican nominee, since she's been running ads about Trump's temperament. Given the scandal surrounding the leaked comments Trump made in a 2005 Access Hollywood video about groping women, Clinton could easily pivot from a discussion about her physical health to Trump's mental health.

With topics like these, who needs a civilized discussion anyway? Only one thing is sure: you're going to need a lot of wine and ice cream for this show.