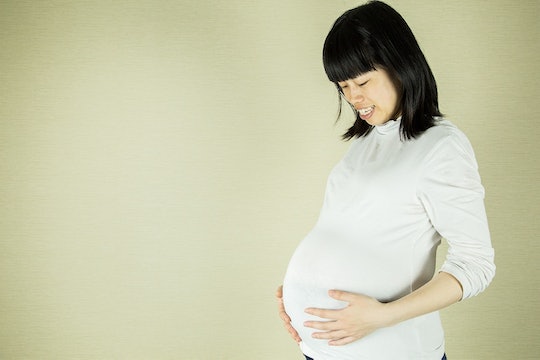 What Trimester Is Most Dangerous To Get Listeria? There's No Safe Window For Moms-To-Be

If you're a mama-to-be and craving a salad or a handful of trail mix lately, you might have reconsidered that lunch option given the number of recent listeria outbreaks and subsequent recalls. The microscopic bacteria poses a serious health threat and can even be fatal in 20 percent of cases; it's especially harmful to pregnant women and their unborn babies. With so many recent listeria recalls, it can be helpful for pregnant moms to know what trimester is most dangerous to get listeria. The scary fact is that any trimester is dangerous to contract listeria, and here's why.

Listeria bacteria cause an illness called listeriosis. According to the President of the American Pregnancy Association, Brad Imler, "Pregnant women are more likely to contract listeriosis during their third trimester, as a woman's immune system is most suppressed during this time." Listeriosis presents health risks to both mother and baby, spanning everything from pre-term labor to miscarriage, stillbirth, and, in some cases, maternal death.

While most pregnant women know to stay away from soft cheeses and deli meats during pregnancy for their listeria risk, other sources of listeria include refrigerated smoked seafood, refrigerated meat spreads or patés, raw sprouts, and ready-to-eat hot dogs.

According to the Food and Drug Administration, there have been 26 recalls as the result of listeria concerns since late March, and they include food products such as frozen vegetables, packaged sunflower seeds, and potato, macaroni, deviled eggs, and potato and tuna salads. The FDA also warns that "eating contaminated foods processed or packaged in unsanitary conditions or by eating fruits and vegetables that are contaminated from the soil or from manure used as fertilizer" also pose risks for contracting listeriosis.

In 2014, the American Congress of Obstetricians and Gynecologists issued new guidelines on the management of listeriosis in pregnant women, including:

Fever with or without symptoms: A presumptively exposed pregnant woman with a fever exceeding 100.6º F should be tested with blood cultures. However, because results will not be available for several days, the Committee Opinion recommends that these women should simultaneously be treated for listeriosis and suggests initiating fetal surveillance.

Of the 26 listeria-related recalls on the FDA website, they include major retailers across the U.S. including Kroger, Trader Joe's, and Publix. The best thing pregnant women can do right now is to check the potentially contaminated products if they've shopped at those stories recently, and, when in doubt, cook all food to at least 165 degrees F or higher. And if you're concerned that you may have consumed food that may have had listeria, contact your OBGYN as soon as possible.