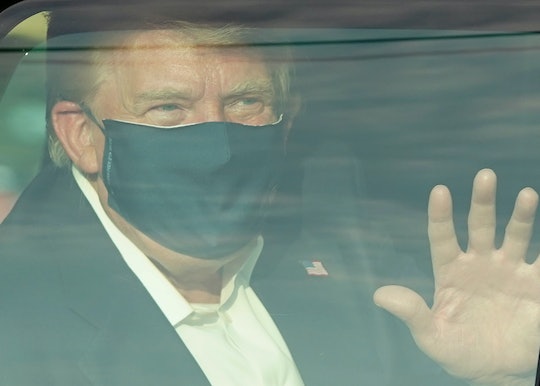 A few days after being hospitalized for COVID-19, a highly contagious virus, at Walter Reed National Military Medical Center, President Donald Trump decided to leave the hospital and take a car ride past supporters who'd gathered outside. While the White House has claimed Trump's doctors approved the car trip as safe and appropriate precautions were taken to protect those tasked with accompanying the president, many have condemned the trip. In fact, families impacted by COVID-19 have criticized Trump's drive to wave at supporters, questioning why they were kept isolated from dying loved ones due to COVID-19 if the president can easily take a car trip despite his COVID-19 diagnosis.

"My father died of Covid alone in a hospital," actor Curtis Armstrong tweeted. "I had to say goodbye to him over a phone. Trump got a joyride to sooth[e] his desperate need for attention, while endangering the lives of the Secret Service people in the car with him. To hell with him and all who enable him."

On Sunday, roughly two days after he'd been admitted to Walter Reed following a positive COVID-19 test, Trump stepped outside the hospital and into an SUV for a brief car ride past supporters gathered nearby. Because COVID-19 is a contagious virus that the Centers for Disease Control and Prevention (CDC) has noted spreads largely through respiratory droplets, Trump's car ride caught many by surprise, including those who'd been forced to sit by while a loved one died alone because of COVID-19's transmission potential.

"I don't understand this. When my mom had covid, NOBODY could be there with her," one Twitter user wrote. "We had to say goodbye via FaceTime. But the POTUS has it and he can rally a whole security detail & drivers out to wave at fans? But my mom had to die alone in a VA hospital, ALSO in Maryland?"

Amid mounting criticism, the White House has since defended the president's trip. As PBS reported, White House spokesperson Judd Deere told the press on Sunday: "Appropriate precautions were taken in the execution of this movement to protect the President and all those supporting it, including PPE. The movement was cleared by the medical team as safe to do."

Photos and video of Trump's car ride show the president wearing what appears to be a cloth face covering while sitting in an SUV with multiple Secret Service agents, all of whom are wearing N95 masks and protective medical gowns.

But despite the reported precautions, many families who lost a loved one to COVID-19 found it frustrating to watch the president excuse himself from following the rules others have had to follow. "When my Dad had Covid, he was confined to his bed in his room in the hospital that was secured," one woman tweeted. "I had to visit him outside his window. Trump went for a drive? Somethin (sic) ain't right here."

Others knew the pain of being kept isolated from family while ill with COVID-19 but stressed it was the right thing to do to protect others. "When I was sick with Covid my mother died and I couldn't visit my family or pick up her ashes because I was under quarantine and that was painful but that was correct," another Twitter user wrote. "Trump is sick with Covid and gets to drive in an SUV and wave to fans and get half his staff sick."

For some, Trump's car ride felt especially thoughtless and disrespectful. "I wish I could just have visited with @JohnPrineMusic in the hospital while he was still awake — we would not have needed a joy ride," Fiona Whelan Prine, wife to the late singer songwriter John Prine, tweeted. "This BS is excruciating to witness and so disrespectful to the 207,000 grieving families."

For others, the president's car ride sparked anger. "I am so angry. Unspeakably angry. I had to have a Zoom memorial for my son," writer Audrey Watters tweeted. "His ashes are still on my desk as it hasn't felt safe enough to drive up to Oregon to scatter them where he and I scattered his father's 15 years ago. I have hugged no one but my husband since March. The last time I saw my son I didn't even hug him because, in March, it already seemed unwise. Fuck these people."

But families impacted by COVID-19 aren't the only ones to have criticized Trump for leaving the hospital for a brief Sunday drive. Even an attending physician at Walter Reed, the hospital Trump is being treated at, has likened the car trip to "political theater."

"Every single person in the vehicle during that completely unnecessary Presidential 'drive-by; just now has to be quarantined for 14 days," Dr. James Phillips, chief of disaster medicine at George Washington University and an attending physician at Walter Reed, tweeted. "They might get sick. They may die. For political theater. Commanded by Trump to put their lives at risk for theater. This is insanity."