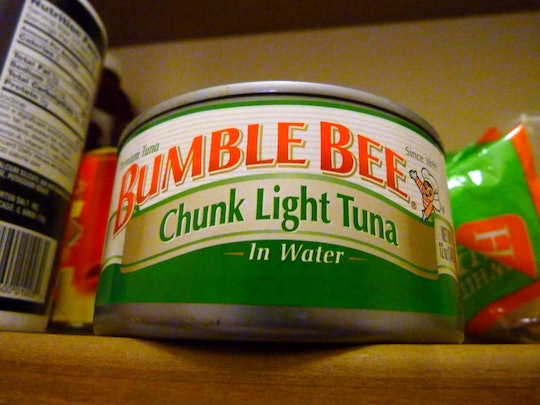 What UPC Codes Were Affected By The Bumble Bee Recall? Check Your Tuna Cans For These 3 Codes

On Wednesday last week, Bumble Bee Foods issued a voluntary recall for some of its canned tuna products. Worried about your tuna fish sammies? There are only three Bumble Bee UPC codes affected by the recall, or as the company notes, 31,579 cases of Bumble Bee canned tuna sold across the United States. The recall includes cans of Bumble Bee Chunk Light tuna with the following UPC label codes: 8660000020, 8660000021 and 8660000736 — these codes can be found on the barcode on the can label. These cans were produced in February 2016 and carry a variety of "can codes," each beginning with a "T" (e.g., TOA2BSCAFB) and have "best buy" dates ranging anywhere from Feb. 2 to Feb. 29, 2019. Consumers are advised to check the Bumble Bee Foods tuna recall page for specific can codes and best buy dates.

The company decided to issue the recall because of "process deviations" in a third-party facility that packs the tuna; the company was quick to note that the co-pack facility is neither owned nor operated by Bumble Bee Foods. While a statement on Bumble Bee Foods's website reads in part: "It is important to note that there have been no reports of illness associated with these products to date," the company has advised consumers to throw out any cans of the recalled tuna if they have them in their possession. Consumers are eligible to receive reimbursement for the recalled tuna, and must contact the company directly to do so.

Over the weekend, two fake news sites — The Racket Report and News 4 KTL — published fictitious articles alleging the Bumble Bee tuna recall was the result of two employees admitting to "cooking a man" and mixing his remains with a batch of tuna. While an employee did die at a Bumble Bee processing plant in 2012, it is in no way related to the current recall — and his remains never made it into a single can of tuna. Urban legend fact checking site Snopes.com quickly published its own article debunking the fake human remains tuna recall report into oblivion.