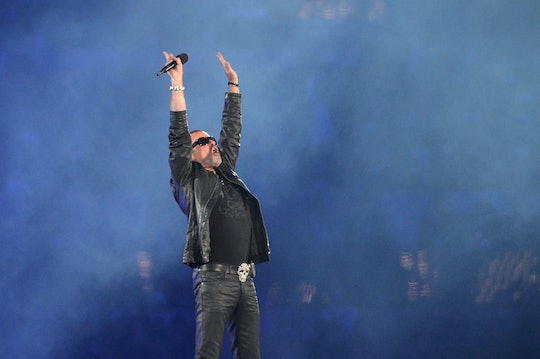 On Sunday, BBC News confirmed through a publicist that singer George Michael had died at the age of 53, after several years out of the spotlight. Michael's last stage appearance was in September 2012. According to his publicist, the ex-Wham! singer "passed away peacefully at home."

"It is with great sadness that we can confirm our beloved son, brother and friend George passed away peacefully at home over the Christmas period," Michael's publicist said in a statement on Sunday. "The family would ask that their privacy be respected at this difficult and emotional time. There will be no further comment at this stage."

Michael, born Georgios Kyriacos Panayiotou, notably sold some 100 million albums over the span of his career, the BBC noted. A 2010 BBC profile reported that Michael's first solo album after leaving Wham!, Faith, sold over 20 million copies alone and earned him the Grammy Award for best album in 1988.

In the years following, Michael led a successful solo career, producing several hit singles and landing himself at number 45 on Billboard's Greatest of All Time, Hot 100 Artists list. His 1992 single "Too Funky" and 1987 single "Faith" (from the aforementioned album of the same name) both spent 20 weeks each on the Billboard Hot 100 list, the former topping out at number 10 and the latter — along with several additional singles from the same album — reaching number one.

In later years, however, Michael's career slowed, due to a number of tragic personal losses and health concerns. In 1993, Michael's close partner of two years, Brazilian Anselmo Feleppa, died of complications related to AIDS. "Anyone who knew me before I met Anselmo would tell you that he opened me up completely," Michael said later, according to the BBC, "just in allowing myself to trust my intuition." A few years later, in 1997, Michael's mother Lesley also passed away. Michael said he took the news "very badly," according to the same BBC profile, sending him into "a period of kind of semi-hibernation."

In 2000, Michael bounced back to work on the single "If I Told You That" with Whitney Houston. By the mid-2000s, Michael was producing and performing regularly again, releasing several controversial political protest songs, and re-signing with Sony Music after a split two years earlier. In 2011, Michael announced he would be embarking on his Symphonica tour, but was forced to cancel the remainder of his shows after he was hospitalized with a severe bout of pneumonia that he said nearly killed him.

"They spent three weeks keeping me alive basically," he told The Guardian that December, noting that, unbeknownst to the public, doctors had been forced to perform an emergency tracheotomy just days earlier. "I'm incredibly, incredibly fortunate to be here and incredibly fortunate to have picked up this bug where I did, because apparently the hospital in Austria that they rushed me to was absolutely the best place in the world I could have been, to deal with pneumonia. So I have to believe that somebody thinks I've still got some work to do here."

In 2008, Michael reportedly expressed a desire for a "quieter life," according to the BBC, but that period didn't last long: That same year, Michael was arrested for alleged class A and class C drug possession, for which he was given a formal warning, and in 2013, he sustained a head injury after falling from a moving car on the M1 motorway.

In February 2016, after a long absence from the stage (his last performance having been in 2012), Michael shut down rumors that he would be announcing a "comeback tour" following a few stints in rehab facilities, according to Metro.co.uk. "[He] will not be touring," a spokeswoman told the outlet, saying that the rumors were "completely fabricated." On Twitter, Michael maintained a low profile, tweeting single announcements and posting videos, but largely keeping to himself.

His last non-career related Tweets centered around his family and loved ones. "To my lovelies and fans around the world, thank you for all the birthday wishes," he wrote in June 2015. "I am truly overwhelmed. I am looking forward to spending it with friends and family." A few days later, following the historic Supreme Court gay marriage ruling, Obergefell v. Hodges, Michael, referencing an earlier album, Tweeted simply and powerfully, "Live Without Prejudice."

More Like This
Prince George Has Apparently Known He'll Be King Someday For A While Now
This Underwear-Clad Mom Saved Her Pet Goose From An Eagle While Breastfeeding
Operation Fly Formula Begins With 78,000 Pounds Of Baby Formula
What Is Monkeypox & Should You Be Worried? Here’s What You Need To Know