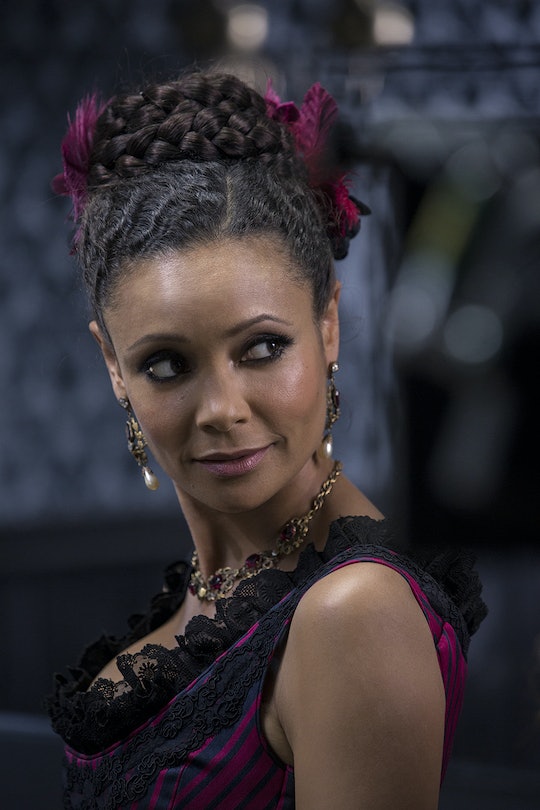 What Was Inside Maeve On 'Westworld'? It Answered Her Questions

On Westworld, many of the hosts are beginning to function in ways they weren't programmed to; they're beginning to remember the horrors they've encountered in past narratives, the ways they've suffered again and again. But in the case of Maeve Millay, those reveries aren't all cognitive – her discomfort isn't only mental, it's physical. The persistent pain in Maeve's abdomen, which she can't comprehend the cause of, hints to her that there are things she doesn't know going on. In her desperation to figure it out, Maeve goes digging – literally. She slices herself open and has Hector the bandit have a poke around inside. It turns out there was something there after all, but what was inside Maeve?

The incident with Hector wasn't the first time Maeve has had to deal with physical pain as the result of a poorly conducted cleanup. In Episode 2, Maeve is brought down to the labs and cut open so that the technicians can see what's wrong; they find MRSA in her abdomen, a strain of staph bacteria that is very difficult to treat. But that wasn't all that was inside Maeve. It looked like Hector pulled a bullet, or bullet fragment, from inside her. This clarifies something for Maeve, but also raises a lot of questions.

For Maeve, who has no concrete idea of what has happened to her throughout her lifetime, it proves that she's not crazy. Something has been going on: she may have no memory of being shot, but there was physical proof in her body that it happened. When Hector asks her what it means, Maeve pronounces that it means none of this matters; she may have realized that she can be shot and possibly killed, but she's still always fine afterwards.

Still, it also raises questions about just what the hosts are made of. The fact that Maeve was affected by bacteria – and even that she can feel pain the way she does – seems to indicate that the hosts are made of organic matter. The show's VFX supervisor Jay Worth confirmed as much, telling HitFix that the hosts' tissue is made of "biological material," something made by technology but nevertheless incredibly realistic and vulnerable to infections like the one Maeve got.

It proves once again that there aren't many differences between the humans and the hosts after all. Except that as many times as Maeve can be killed, she can never truly die. That definitely gives the hosts an edge, and it may be something Maeve is beginning to understand. In one trailer for the rest of the season, Maeve is heard saying, "You think I'm scared of death? I've done it a million times. I'm great at it. How many times have you died?"