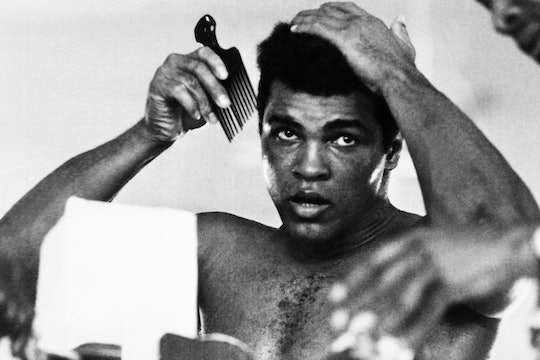 What Was Muhammad Ali's Real Name? He Changed It For An Inspiring and Personal Reason

He was nicknamed “The Greatest” and has been regarded as one of the greatest athletes in sports history. Muhammad Ali died late on Friday at the age of 74 and the world has been in mourning ever since. Not only were the legendary boxer’s victories celebrated worldwide, but almost anybody would be able to say the know the name “Muhammad Ali” even though that was not always his name. So, what was Muhammad Ali’s real name? The story behind why Ali decided to change his birth name is actually quite inspiring with plenty of personal significance behind it.

He’ll be known as Muhammad Ali forever in history. Avenues, boulevards and streets across the country even bear this name. But, Ali was born Cassius Marcellus Clay Jr. on Jan. 17, 1942, the same name as his father. Cassius Sr. had been named after the anti-slavery crusader who became known as a major figure in the abolitionist movement after emancipating the 40 slaves he had inherited from his family.

Cassius Clay the abolitionist was born in Kentucky in 1810, and despite his anti-slavery views he held the title of Kentucky legislature twice. He was influential in organizing the United States’ purchase of Alaska when he served as the U.S. Ambassador to Russia. His emancipationist views were also published in the anti-slavery journal True American.

Ali won his first amateur match with this name in 1954 and went on to claim many of his earliest success as Cassius Marcellus Clay Jr., including winning the light heavyweight gold medal at the Olympics in Rome. His career took off after he won the gold medal in 1960, leading to him to numerous legendary fights in the coming years. At just 22 years old, Ali rose to fame as the heavyweight boxing champion after he beat Sonny Liston in 1964.

In 1964, shortly after he won the coveted title, Ali joined the Nation of Islam. It was then that Cassius Marcellus Clay Jr. denounced his birth name and became Muhammad Ali.

“Cassius Clay is a slave name. I didn’t choose it and I don’t want it,” Ali announced in a recorded statement , according to a recent piece in the Independent. “I am Muhammad Ali, a free name – it means beloved of God, and I insist people use it when people speak to me.”

Journalists were reluctant to accept his name change at first because Ali had already accomplished an impressive career under his original name. But, Ali was firm with his decision. His passion and dedication to his faith were powerful enough to have the world know and remember his as the name he wanted: Muhammad Ali.