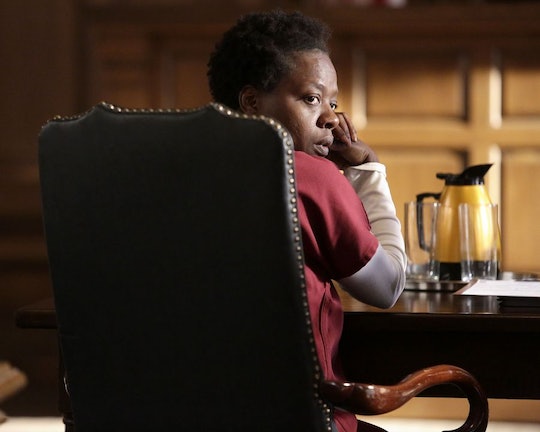 Annalise's Phone May Hold The Answers On 'HTGAWM'

We knew very early on in the series that Annalise had asked Oliver to swipe her phone shortly after the house fire occurred and Wes' dead body was found inside of it. But it was never really explained why she needed that to be done, especially if she was supposedly innocent of the crime. So what was on Annalise's phone on How To Get Away With Murder? Thanks to Oliver, we may find out the answer to that question very soon.

At first I just assumed her phone contained incriminating evidence of everything she and the Keating Five had committed up until that point in time. And since it was her house that the dead body was found in, then it would put unwanted attention on Annalise, so she just wanted to cover up her tracks just in case a warrant for her phone was ever presented to her. But maybe there's more to it than that. Considering the series has taken the time for Oliver to create a backup copy of whatever he deleted from her phone, I'm thinking it could end up pointing us to who the killer really is and finally give viewers some answers about what happened that night.

It feels too obviously to immediately think that Annalise did it and the evidence of it is on her phone. That's just not this show's style. There are always more to these types of things than initially meets the eye. Maybe there was something incriminating about Wes on her phone and she didn't want it in the wrong hands in order to preserve his memory. Or maybe she has evidence of who the real killer could be and is trying to protect them. Perhaps she realized it had been an accident and doesn't want more than one life that she cares about to be ruined.

Either way, Oliver has now made Connor aware of the data he still has in his possession, so it's only a matter of time until they go through it and figure out why Annalise wanted this information deleted. Let's just hope they share it with us so we can finally get some answers about this latest and most tragic murder.