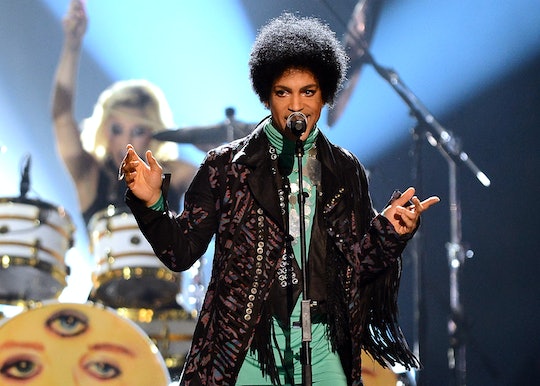 What Was Prince's Cause Of Death? The Iconic Singer Died Of A Drug Overdose

Just after Prince's death, TMZ reported that singer-songwriter had allegedly died of complications from an untreated drug overdose that had occurred just days before his tragic death in April. He died April 21, and rumors and confusion had been circulating social media, many of which claimed that the singer had died from flu complications after he was found unresponsive in an elevator at his private studio. In the wake of so many confusing details, it was easy for fans to wonder what Prince’s cause of death really was. But a new report has finally confirmed TMZ's sad theory.

While the TMZ report went unconfirmed for some time, the claim that Prince had died from overdose complications was confirmed by the Associated Press on Thursday. A law enforcement official told the AP that Prince died of an opioid overdose, and that investigators are trying to find out whether he was being prescribed the drugs by a doctor.

On the Saturday before his death, hours after what turned out to be his last performance in Atlanta, the iconic singer’s private plane made an emergency landing in Moline, Illinois — about a one hour flight from Minneapolis — to treat what was declared a "medical emergency." However, TMZ later claimed that Prince had reportedly been rushed to the hospital to receive a “save shot” — typically administered to reverse the effects of an overdose of heroin or some types of painkillers. Doctors reportedly advised Prince to stay in the hospital for 24 hours, but the singer left three hours later, supposedly because there weren’t any private rooms available. The outlet also reported that when Prince left the hospital on April 15, he "was not doing well."

On April 21, CNN reported that paramedics had found the 57-year-old singer unresponsive and had tried to perform CPR but were unable to revive him. He was pronounced dead at 10:07 a.m. Central Time.

The Carver County Sheriff’s Office released the transcript of the 911 call made at 9:43 a.m. on the morning of Prince’s death — just 30 minutes before he was pronounced dead. The caller said the people at the house were “distraught,” and said he didn’t know how Prince died. An unidentified male on the phone seemed shaken up in his conversation with the 911 operator, according to the call transcript.

The dispatcher continued to asks the caller to locate the address, which the man did before identifying the deceased as Prince. "You’re at Paisley Park, OK, that’s in Chanhassen," the operator confirmed, before the man cut them off, saying, "Yes, it’s Prince."

The source who confirmed the overdose to the AP wished to remain anonymous because they were not authorized to speak to the media. The timing of the announcement would make sense, though, because of the amount of time it takes for investigators to rule out other causes of death. Prince's autopsy was reportedly completed on April 22.