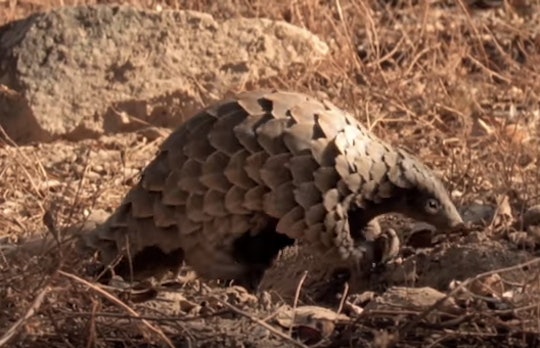 What Was The Endangered Animal In 'The Jungle Book' That Baloo Joked With? It's Super Cool

Families around the country will be flocking to theaters this weekend to see the Disney live-action remake of Rudyard Kipling's The Jungle Book, complete with a star-studded cast and a reinvention of the classic "The Bare Necessities." The movie has received amazing reviews not only because it's a fun adventure for kids, but also because it's actually entertaining for adults as. At one point in the film, Baloo the bear has convinced Mowgli to climb up the side of a mountain to retrieve honeycombs for him. When all of the other jungle animals see this happening, they gather around to watch the show. One of them tells Baloo there's no way this man-cub will survive the task, and Baloo tells him to be quiet, or else Baloo will make the animal even more endangered than it already is. What was the endangered animal in The Jungle Book that Baloo joked with? It was easily one of the movie's best jokes.

The scaly-looking creature that calls Baloo out for his terrible, selfish plan to get honey is a pangolin, which are apparently commonly referred to as "scaly anteaters," according to SavePangolins.org. Pangolins are actually endangered — Save Pangolins reported they are the "most endangered group of mammals in the world" — and they live across Asia and sub-Saharan Africa.

CNN's John D. Sutter wrote an in-depth report on the animal titled "The Most Trafficked Animal You've Never Heard Of" in 2014. Pangolins are trafficked for their scales, which Sutter reported are "boiled off their bodies" and then used in medicine. Their meat is also considered a delicacy in China and some believe their blood has healing properties. According to that report, no one actually knows how many pangolins are left on earth because they are trafficked so heavily every year.

It's sad, because they're super cute, and, like many animals who fly under the radar, they are crucial to larger ecosystems. Pangolins control pests and also dig around in the soil, which doesn't seem like a big deal. But their digging and burrowing helps mix up the soil so that it's replenished with vital nutrients, according to Pangolins.org. (Yes, apparently pangolins are so important that there are a number of websites just dedicated to them.) Rich soil helps produce vegetation, which helps feed millions of other living things.

So, the small joke that Baloo made in The Jungle Book actually had a much larger and very important message. All eight species of pangolins are not doing too hot: two are listed as critically endangered and all of the remaining six are threatened, according to the World Wildlife Foundation. But people can help pangolins just by talking about them with their friends and family. If you travel to Asia, don't eat or buy pangolin goods, and instead support one of the many organizations working to protect pangolins around the world. They are pretty darn cute, cool creatures, but we have to help protect them to keep them around so they can poke fun at future Baloos.