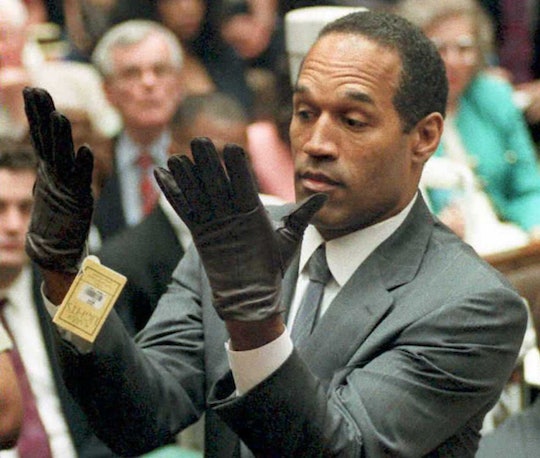 What Was The Evidence Against O.J. Simpson In The Nicole Brown Simpson Murder?

With American Crime Story: The People v. O.J. Simpson scheduled to premiere this Tuesday, audiences will be transported back in time over two decades ago to one of the most sensational trials of the twentieth century. With a powerful cast of stars, including Cuba Gooding, Jr. as Simpson, John Travolta as Robert Shapiro, Courtney B. Vance as Johnnie Cochran, and David Schwimmer as Robert Kardashian — we'll revisit the courtroom spectacle of the trial, including the evidence against O.J. Simpson in the Nicole Brown Simpson murder. With a life sentence on the line, Simpson bought himself a star-studded defense team including Shapiro, Cochran, Kardashian, as well as F. Lee Bailey and Alan Dershowitz.

The "trial of the century", as it was called at the time, featured a slew of evidence from both the prosecution and the defense, including the relatively new use of DNA blood analysis as evidence in trials. Without witnesses or a murder weapon, however, the Simpson's "Dream Team" cast doubt on the reliability of the evidence presented. After an eight-month long trial where 134 days were broadcast on Court TV (now truTV), Simpson was found not guilty of the murder of his ex-wife, Nicole Brown Simpson, and Brown's one-time boyfriend, Ronald Goldman.

Here are a few of those pieces of evidence that the defense eventually argued away in court:

On Jun. 13, 1994, Brown and Goldman were found murdered in Brown's home in the Brentwood neighborhood of Los Angeles, California. Both were found with multiple stab wounds to their neck and head, leaving a bloody scene. Evidence gathered from the crime scene included bloody footprints, a black leather glove, and a black knit cap. When law enforcement conducted a three-hour investigation of Simpson's estate in Rockingham, they discovered a bloody pair of socks that matched Brown's DNA, as well as the other glove that matched the glove found in Brown's home. Investigators also found traces of Brown and Goldman's blood in Simpson's white Ford Bronco.

A History of Violence

After seven years of marriage, Brown filed for divorce from Simpson citing "irreconcilable differences" and Simpson pleading no contest to spousal abuse. The prosecution opened their case by playing a chilling 9-1-1 call made by Brown on the night of Jan. 1, 1989. In it, the jury could hear Simpson screaming and shouting at Brown, as she describes how he broke down her back door, threatening her.

Without a smoking gun — the prosecution couldn't produce a murder weapon or direct witnesses to the murder — Marcia Clark, the Deputy District Attorney who served as the lead prosecutor for the state, had to focus their case on the mountain of DNA evidence gathered in the murder scene, and Simpson's house and vehicle. In 1995, the use of DNA evidence in the courtroom was still an emerging science, which Simpson's defense team viciously tried to tear apart the state's case. Additionally, Simpson's lawyers argued that LAPD Detective Mark Fuhrman deliberately planted evidence at the crime scene and tampered with DNA samples. When asked the question "Did you plant or manufacture any evidence in this case?" on the stand, Furhman pleaded the fifth, in a particularly damning moment during the trial.

"If it doesn't fit, you must acquit."

This now famous phrase was spoken by Simpson's lawyer, Johnnie Cochran during closing arguments by the defense. In context, Cochran said it to explain how the bloody glove found at the crime scene did not fit Simpson's hand, but the phrase was use broadly to sum up the defense's case: Despite all the DNA evidence, Simpson's lawyers argued that the evidence simply didn't fit the accused perpetrator. Despite an almost overwhelming presentation of evidence against Simpson and, indeed — the state thought they had a rock-solid double murder conviction — Simpson was acquitted of both murders on Oct. 3, 1995, stunning the world during one of the most publicized trials in history.

Now, thanks to FX and American Crime Story, we'll be able to take fresh eyes to this 20+ year old case — but nothing will change the verdict or bring back the lives of two innocent people brutally murdered on that June night in 1994.