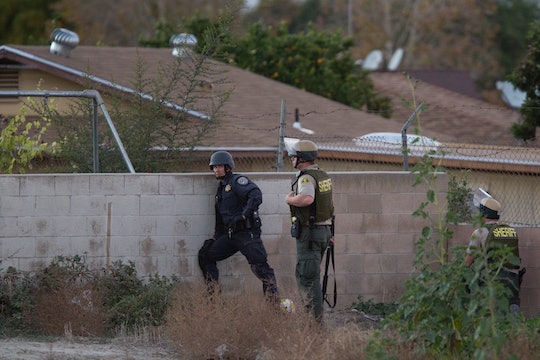 What Was The San Bernardino Shooters' Motive? Several Theories

Update: In a press conference Thursday President Obama said the motive in the San Bernardino shooting"may be mixed," which he said makes the ongoing investigation more complicated. He also said "we don't know" if the shooting was terrorism-related.

Late Wednesday authorities identified the two San Bernardino shooting suspects killed in a police shoot-out as Syed Farook and Tashfeen Melik, a woman, and said they had been in a relationship. Farook was a U.S. citizen and an employee of the of the San Bernardino County Health Department. Further details about Melik are not yet known. Police also detained a third individual at the scene, but it's unclear whether or not that person is connected to the shooting at the Inland Regional Center (where officials say they might have found an explosive device).

Earlier: As more and more details trickle in about the male and female suspects behind the deadly attacks at the Inland Regional Center in San Bernardino Wednesday, law enforcement and citizens alike are wondering: what was the San Bernardino shooters' motive? There are a couple of theories as to the motives behind this deadly mass shooting, which killed 14 and wounded 21 and is the 352th mass shooting of 2015. One theory is that one of the suspected shooters (it's unclear yet if this was the male or female) got into an argument with a coworker at the holiday party for the organization that offers services to disabled persons. The "heated argument theory," isn't so far-fetched. Just last month, a student in the University of California Merced outlined a detailed manifesto, which he later carried out, stabbing his classmates on campus because he felt snubbed by a study group. Reports that the "workplace violence" motive for the shooting have yet to be detailed.

Another theory that has been circulating is that the attack was a terrorist plot. David Bowdich, assistant director of the FBI's field office in Los Angeles, said terrorism might be behind the San Bernardino, and the explosive device found at the Inland Regional Center points to more than just a "workplace violence" motive. Because several hundred people were inside the center during the attack, it could have been much deadlier had the device detonated.

That theory is unsurprising given the spate of terrorist attacks around the world recently. We're living in a time when mass violence makes people think of terrorism and the enemies who with the U.S. harm. It's also not surprising that there are already rumors that ISIS is responsible for the San Bernardino attack. That said, on CNN FBI Assistant Director Ron Hosko said the suspects are probably “anti-government” or “militia” types, as opposed to soldiers of ISIS. San Bernardino Police Chief Jarrod Burguan is certain of one thing. The killers looked “as if they were on a mission,” he said in a press conference Wednesday.

And then some people argue that the motive of this tragedy doesn't matter because it doesn't change the end result.

Until more news comes in about who the shooters were, and who the third detained suspect is, and whether or not he has any relation to the assailants, all we have are theories.