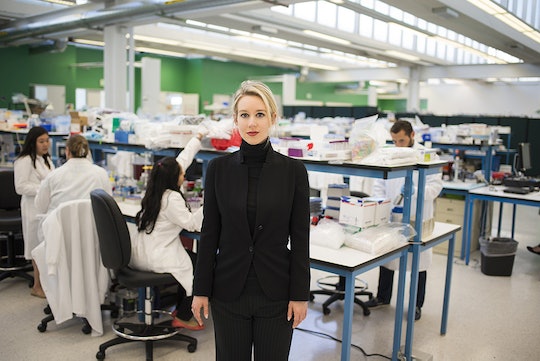 Theranos Was Tech's Version Of The Fyre Festival

HBO releases its latest documentary, The Inventor: Out for Blood, on March 18. The compelling and utterly bananas doc revisits the rise and fall of Theranos, and its eccentric founder, Elizabeth Holmes. So, what was Theranos? Although the moniker might remind you of a Greek god or action-hero's name, "Thernaos" — like Holmes' entire company — doesn't appear to be backed by much science at all.

Similar to many start-ups out there, Thernaos made big promises when it entered the tech scene in 2003. To sum it up, the company claimed it had created blood tests that "required only a finger prick — and could deliver results of up to 30 tests in hours using its own lab testing instrument ('Edison Machines')," according to Vox.

Not only did this so-called invention promise to help patients avoid the pain and ordeal of traditional blood draws, but it hoped to save time and money for health care professionals.

If this sounds too good to be true, you're right on the money.

Holmes came up with her company's name by combining the words "therapy" and "diagnosis." The name comes across as strong, assured, and very tech, which probably added to the allure of Theranos' compelling claims.

It's unclear how far Holmes would have gone if a group of researchers, journalists, and whistleblowers hadn't drawn attention to Theranos' numerous issues.

Additionally, the company allegedly "used unqualified or inadequately trained personnel and stored samples in freezers that were not at the proper temperature," while also allegedly failing to "ensure that the quality control for an important blood-clotting test was acceptable before reporting results for patients," according to The New York Times.

As for the magical blood prick test Theranos promised, it didn't exist.

Theranos officially dissolved in September 2018, with a $60 million debt to its creditors, according to USA TODAY. Prior to the dissolution, Holmes, and former Theranos COO and president Ramesh "Sunny" Balwani, were charged with "two counts of conspiracy to commit wire fraud and nine counts of wire fraud," according to CNN.

The two were accused of “raising more than $700 million from investors through an elaborate, years-long fraud in which they exaggerated or made false statements about the company’s technology, business, and financial performance," according to Refinery29.

Holmes' lawyer did not immediately respond to Romper's request for comment.

Balwani's legal rep, Jeffrey Coopersmith, told CNN at the time of the indictments:

Mr. Balwani committed no crimes. He did not defraud Theranos investors, who were among the most sophisticated in the world. He did not defraud consumers, but instead worked tirelessly to empower them with access to their own health information. Mr. Balwani is innocent, and looks forward to clearing his name at trial.

Holmes and Balwani's trial date has not been set at this time.

Amid all of the documentaries, podcasts, and books about this case, it's important to remember the innocent patients affected by Theranos' promises. The company's investors aren't the only victims here.

This article was originally published on March 18, 2019