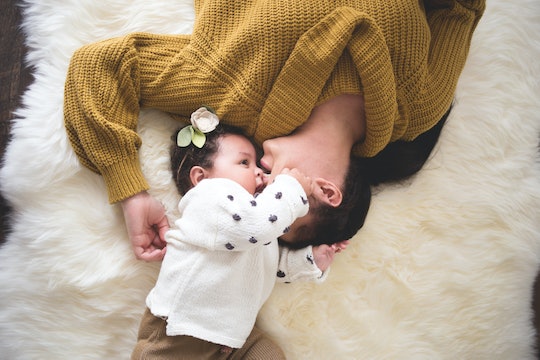 What We Get Wrong About Millennial Moms & Postpartum Depression

It’s a truth universally known that millennials are having the toughest time “adulting” of all the generations in modern memory. With the highest instances of depression and anxiety at work of any modern generation, per Bloomberg, you’d think they’re either wholly unprepared for the “real world” or their difficulties are overblown and their expectations are unrealistic. While older generations get some pleasure from mocking "the youngs" for being difficult to work with because of their lack of work ethic and need for encouragement, there’s also evidence that millennials are, perhaps, the most empathetic generation we’ve seen. The struggle is real and when you throw parenthood into the mix, you would think that we have an unprecedented problem on our hands. So are millennial moms the most depressed generation yet? There are many reasons to think that they should be.

More Like This
Therapist Says: Alone Time For Moms Is A Necessity, Not An Indulgence
I've Missed You So Much! You Still Can't Touch The Baby.
10 Hilarious Tweets That Perfectly Capture What Moms Are Going Through
Can Ovulation Cause Depression? Experts Explain

As many as 1 in 8 childbearing women will suffer from postpartum depression.

In previous generations there were no mommy blogs to give you advice from home and let you vent with other mothers about the insanity of having a toddler in your life; you were on your own or reliant on whomever lived nearby. There weren’t even “mommy and me” classes to help you out. Go ahead, ask your grandma about entertaining toddlers at home all day, or your older friends about “latch-key kids.” There wasn’t daycare starting at a few months old, and there wasn’t “after care” if your parents both worked. You were on your own with the support of family or friend-neighbors who lived nearby. Hopefully your family wasn’t dysfunctional but helpful, because having unhelpful family nearby is possibly worse than being alone, but I digress.

Also before millennials, there wasn’t a lot of emotional support for mothers struggling with the “postpartum blues” (a temporary form of depressive feelings in the days after birth), postpartum depression (PPD), or the different and more rare condition known as postpartum psychosis. Many women experienced it and simply didn’t even know they were dealing with something different than other new mothers. Just the term “baby blues” downplays the severity of what depression is like as an experience. It sounds fairly innocuous and like something that’ll just pass or you’ll get through. Sometimes you are lucky and it does “pass” or you don’t experience it at all. For the rest of us, it is an unimaginably hard slog and sometimes impossible to get through alone.

A Chapman University-UCLA study found that as many as 1 in 8 childbearing women will suffer from postpartum depression. Postpartum depression is the most common postnatal complication and affects about 5 to 15 percent of women after childbirth, and, according to the U.S. National Institute of Health, is 20 times more likely to affect women with a history of depression. If a woman experiences PPD with her first pregnancy, she is very likely to experience it with any subsequent pregnancy. Generally, if symptoms go beyond a two-week period, it’s usually an indication of postpartum depression.

Recently, a Danish study mentioned on Fatherly, and originally published in PLOS Medicine, indicates that “1 in every 200 women who have no psychiatric history will suffer from… postpartum depression.” The PLOS Medicine study followed over 400,000 women over 17 years. Additionally, we are now acknowledging that about 10 percent of fathers experience postpartum depression as well.

There have been recommendations from a variety of U.S. medical groups and from other countries stating that all pregnant women should be screened for depression before they give birth. However “extensive studies have not been done [to verify that pregnant women are being screened], so there’s scant information about how well this is implemented throughout the United States.” In the Netherlands, where they already do screening, at nine months postpartum the cohort of screened women had a 60 percent lower incidence of major depression than the unscreened group, per a study published by the American Academy of Pediatrics.

Although you may be obsessed with your daily fix of your virtual social life, and that may be making depression worse, it isn’t the cause.

Is this a new problem for millennial moms (and dads)? Maybe, maybe not. The lack of long-term data prior to the 1990s makes it difficult to discern. Studies completed between 1999 and 2002 (so before most millennials moms were on the scene), and compiled by the World Health Organization showed that approximately 13 percent of women experienced PPD within a year after childbirth. That is pretty much the same result as more recent studies compiled in the past two years. It is also the same before and after smartphones existed. So although you may be obsessed with your daily fix of your virtual social life, and that may be making depression worse, it isn’t the cause.

In fact, to add more usable data to the mix, the University of North Carolina School of Medicine launched the largest ever postpartum depression study in 2016, and are hoping to study 100,000 women worldwide and it all happens via your iPhone or Android phone. Any English- or Spanish-speaking pregnant woman can sign up to join the study. What is the intended end result? More evidence to guide policy and healthcare decisions.

So, millennial moms, the general consensus is that you are not the most depressed generation of mothers in modern times you are experiencing what generations have gone through and the problem is finally getting a lot of press coverage — so it seems worse. And, honestly, it doesn’t matter if the statistic is one in a million or one in 16, if it’s happening to you, all that matters is getting help.

OK, millennial moms aren’t necessarily at risk of postpartum depression above and beyond the norm, but there are real issues in the U.S. that can exacerbate the problem.

The upside is that you are not alone. Your sisters from Gen X are by your side, because they’ve been through it and are still going through it, plus your baby boomer grandmother can relate, too. More importantly, there are more options for new mothers to help you cope with the reality of being a new mother while managing the changes that come with that new human and the roller coaster hormonal, physical, and psychological changes that happen within you.

The Reason It’s Trickier Than You Think

So, OK, millennial moms aren’t necessarily at risk of postpartum depression above and beyond the norm, but there are real issues in the U.S. that can exacerbate the problem. Here, as well as many other countries, we have a problem with how we talk about “mental illness.” There is the scientific way where doctors need to label something in order to discuss, quantify/diagnose, compare and distinguish it from the average. This is not wrong, but it is not helpful for the everyday woman who hears “illness” and may believe she is “broken,” she may feel that this illness is simply who she is.

Secondary to that, the high costs of healthcare (hello, deductibles!) and mental healthcare, and a lack of nationally-consistent psychological maternal services means that many new mothers are not getting the help they need while experiencing the loneliness and isolation of motherhood. Additionally, if you need or want medication, it is a monthly cost that may not fit your family budget. For many new mothers, however, making changes to the family budget in order to fit in weekly therapy sessions and a dose of medication is just the fix they need to feel better. Each mother has to make her own choices for herself and her family.

What To Do If You Think You Have PPD

If you’re feeling, “This is just way, way too hard” and “this can’t be what it is like for everyone or no one would ever have another baby again” and your baby is now about a month old, then it’s time for help. There are similar signs that every mother dealing with postpartum depression experiences: being constantly overwhelmed is a huge tip off that you are struggling.

Most women try to just deal with it, hoping it will pass, or are embarrassed they are having a hard time and keep rolling while experiencing the very real isolation of motherhood and loneliness.

Don’t be afraid to seek a diagnosis. A psychologist or social worker is usually better than a general doctor, but work with what your health insurance will approve as well as what you can afford. The important thing is finding a good match of a professional for you and your needs.

Next, ask for help. Seriously. Most women try to just deal with it, hoping it will pass, or are embarrassed they are having a hard time and keep rolling while experiencing the very real isolation of motherhood and loneliness. Some women think it’s just because they went back to work right away but not related to their body and life changes, and don’t have the time to take it seriously. What if you’re a stay-at-home mother? You should be able to handle yourself and a baby. If you’re having a tough time of it, it’s OK, go get some help.

Millennial mothers naturally turn to the internet for advice, but something every new millennial (and Gen X) mother has had to learn that previous generations did not is: not all advice on the internet is equal. But you’re savvy, you already knew that. What’s next?

Sometimes just getting outside can help.

Something you can do immediately is try some “mindfulness” exercises. If you have about 10 minutes a day, some parents find the Headspace app a useful tool to guide meditation. Headspace even has a pack called “Depression” that is helpful not just for the mental break it gives you to breathe, but also presents new ways of thinking about depression and your “self.”

If you’re ready for more, you can learn more about how meditation, along with other supportive methods, can teach you to change the depression cycle. If the idea of meditation makes you want to throw things at the wall, go take a walk — even if it’s pushing the stroller. Sometimes just getting outside can help. Don’t use your phone. Outside is your time. Unless you get a call with an absolute emergency and you are the only one on the planet who can help and it must be right now — ignore it until you get home. Your brain needs the break.

What if it happens again? Good question, what if you start to feel better, you find your groove and you end up being pregnant again — could postpartum depression come back? Yes, it could. It might not even be exactly the same as the first time, but you know what? You can do this. You did it before and now you know your signs and triggers and you have tools to work through it and people to help you. Because guess what? Having two kids at home is not double the work, it’s like a hundred times the work. But you can do this; you already are.

CORRECTION: A previous version of this story mischaracterized the "baby blues." It has been updated to accurately reflect the definition of "postpartum blues" provided by the American Congress of Obstetricians and Gynecologists.