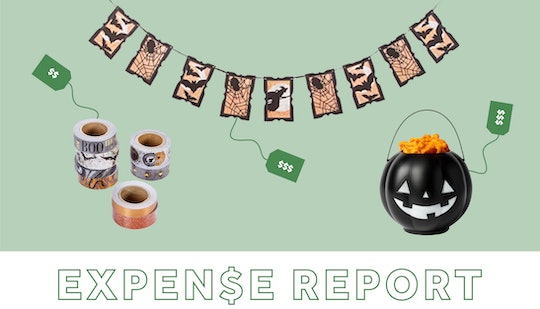 This year, Americans are expected to spend $9 billion on Halloween, even while suburban trick-or-treating is in decline. This Ohio-based family offers one explanation behind hopeful Halloween spending.

Family: A Mom and Dad in Their Late 30s

Yes, I know we just moved to a house with a 130-foot driveway set back from our city’s busiest road. Yes, I know that any money spent on Halloween could have spent paying down the new mortgage that came with that driveway, as well as student loans from our combined four graduate degrees. Yes, I know that part of the city’s population does not celebrate Halloween for religious reasons. Yes, I know that my son prefers the school’s indoor parade to begging for candy in the cold, dark, early evenings of Northeast Ohio.

But I will not be the new neighbor who runs out of candy on Halloween.

I was willing to move to the suburbs for two main reasons: 1) living within the delivery zone of a Pizza Hut, and 2) passing out candy on Halloween. But if I’m being completely honest, it was also for a third reason: befriending a neighbor.

I’ve known plenty of my neighbors. There was the woman who played Creed’s “Higher” on loop, yelled charming expletives at her boyfriend. There was the woman who sang along with Adele’s “Hello” (also on loop) to the granddaughter she moved in to take care of. There were the neighbors who helpfully removed all the packages from our porch when we were out of town for the weekend because someone might have stolen them.

After my son was born, there was a wonderful neighbor who visited us in the NICU, cooked us dinner, and always stopped to ask how we were doing, all before she cruelly moved away for a great career-and-family opportunity.

In a time of grocery delivery, dry cleaning delivery, wine delivery, and everything-else-on-Amazon-delivery, it feels like my closest local relationship is with our UPS delivery man.

That’s why Halloween, a day built for giving free stuff to strangers, feels like one of the best ways to form a community.

Those complaining that Halloween started too early this year were about six weeks behind me. I started in June, when Martha Stewart Halloween crafting materials went on an inexplicably great sale.

Decorations are necessary because no discerning candy-seeker will walk down a driveway this long without the promise of a good haul. My son suggested that we make a sign for the end of the driveway that reads “We have candy,” but I favor a slightly more on-theme (if equally subtle) collection of bats, orange lights, and paper-crafts.

Those new decorations will feature alongside big-ticket purchases from previous years, like the $70 Grandin Road skeleton (my son calls him “Skellie”) and his $60 dog, Shadow. Generously assuming that these decorations-turned-beloved-toys will last three years in a home with a young child, they cost us about $43 per year.

In previous years my son and I have collaborated on treat buckets. Winnie the Pooh had a “hunny” pot. Fuzzy Bunny had an oversized carrot. Shrimp Taco had a bag of Hint of Lime Tostitos. Link, however, carries all of his things in an invisible bag of holding, and since such a carryall escapes my crafting abilities he will be carrying an out-of-character pumpkin pail.

I’m going to dress as a person without social anxiety, who doesn’t worry about the state of her floors or whether people will judge her for distributing so much high-fructose corn syrup. Someone who is always happy for a neighbor to drop-in. Someone who will definitely not be up all night stressing over how she said or did the wrong thing to that cute princess and her mom. Also, I’ll wear a witch hat.

My husband, always willing to play along, will be dressing as an extrovert who likes to walk around the neighborhood. Possibly with a mustache.

Getting In The Spirit

Although we’re technically just a few bags of candy away from being ready for Halloween, we have to spend the next month distracting my son from his plastic shield and sword, so we’re spending the month seeking out fall fun.

We’ve already visited our favorite fruit farm for decorative gourds, and will buy carving pumpkins and likely some impulse gourds next month. We’ll invite friends over for Halloween funfetti cupcakes and halloween-themed fun, like my personal favorite, bobbing for donuts. All those playdates mean late dinners, which means disposable plates and napkins.

When I said we’re just a few bags of candy away from being ready for Halloween, I really meant a few more bags, because we’ve already eaten the first round of candy. It’s hard work getting the house ready for new people. I deserved a few treats!

The trick with the second round is to buy candy my son loves but that I can resist walking by when the candy bowl is still full on November 1. So just a little chocolate and a lot of Haribo. We’ve also bought mounds of tiny toys for candy-averse trick-or-treaters. Our local ice cream chain sells dry ice by the pound, which we’ll use to lure people up the driveway…and to keep some libations cold for trick-or-parents.

I figure Halloween is a good way to start building that community. So there will be candy. There will be tiny toys. There will be grown-up libations for any parent willing to walk our driveway. Hope to see you soon.

Prices for each item may vary.