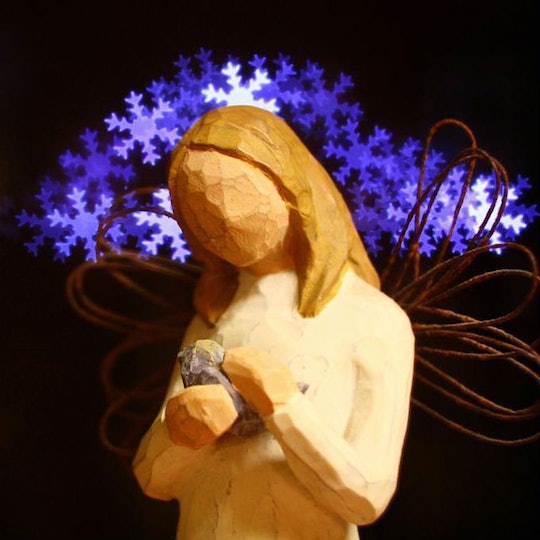 An unlikely (and extremely sad) story has quickly become the Internet's symbol of the holiday season. A newborn baby was found abandoned at a New York City nativity scene Monday, umbilical chord still attached. The crying infant, wrapped in blankets and found by a church custodian, was quickly taken to a nearby hospital and is reportedly in good health. A young couple who frequents the parish has already voiced their interest in adopting the child, causing many to label the situation a sort of Christmas miracle. That's not what's going on here.

Although feel-good stories are always welcomed, especially this time of year, the conversation we should be having about this baby and the woman who gave him up is being ignored. What happened in that church is the direct result of choices made by voters and legislators that leave many women feel like they don't have other options.

Let's start at the beginning. If women had easier access to cheaper contraception, unwanted pregnancy rates would drop. The average cost of the Plan B pill is between $35 and $60, although the makers of the emergency contraception are offering $10, printable coupons to women who can't afford it. It's a step in the right direction, but it's not enough.

If abortion wasn't stigmatized (or increasingly inaccessible in many states), women would feel more empowered to take control of their reproductive rights instead of putting their minds and bodies through 40 weeks of gestation. While it's reported that one in three women will have an abortion in their lifetime, women are constantly made to feel like monsters, murderers and selfish, self-centered concubines for choosing the course of their own life. (And if you think pregnancy does not affect the course of a woman's life, you have never thought about what it might be like to be pregnant.)

And then there are the ways we don't support mothers who choose to have and keep their babies. If women at all income levels had access to counseling, factual information concerning postpartum depression and its symptoms, quality and affordable childcare and paid maternity leave, they would be better equipped to bring a baby into their lives. Only thirteen percent of Americans have access to paid maternity leave through their employer, and the United States is one of the only developed countries to not make paid maternity leave mandatory.

Fortunately, members of the church and community where the infant was left were quoted as saying compassionate things about the woman who left the infant. The store clerk who sold her the towels she later swaddled and left the baby in told the Daily News, "Maybe she couldn't raise the baby.” "We can’t imagine the desperation she must have gone through," said the diocese spokesperson. All of which demonstrates an awareness of this womans feelings and situation that we need more of.

However, pro-life advocates are (unsurprisingly) portraying this woman leaving her child at a church as a best case scenario, and evidence that abortion is unnecessary and that women who have abortions don't deserve to be "bless[ed]" by God.

For this already existing child, this probably is the best case scenario. But it's quite possibly not the best case scenario for the woman who had him. It could also be that she didn't want to give up her kid but had no other options, and she will have to live with the loss of her baby for the rest of her life. It could be that she is in physical danger, if she gave birth without any medical care because she was so ashamed of her pregnancy. It could be that if certain structures were in place and she lived in a society with different attitudes around women's sexuality and different policies, she would have have a baby later, when it was the right time in her life, a baby she had the resources to raise because she had the support to do it.

It's easy to think, hearing this story, either, "she did the right thing," or, alternately, "how dare she?" but both a) grossly oversimplify the situation and b) place responsibility for it entirely on her, when in fact it's shared by a society that refuses to support women and their reproductive choices.

So, no, a baby being found in a make-shift nativity scene in NYC is not a "Christmas miracle." What is a Christmas miracle is the fact that so many women in this country continue to do what is best for them, their bodies and their families, despite the fact that their communities make it difficult to do so, are constantly judging them and continue to send the message, in ways large and small, that women's needs and choices don't matter.