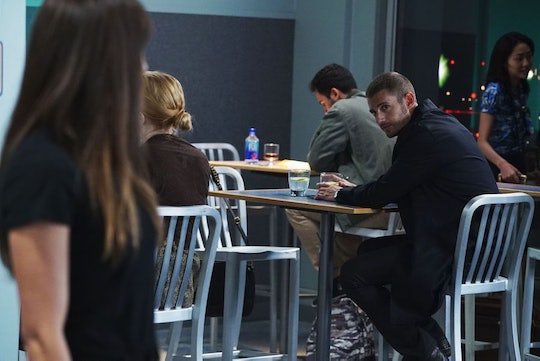 Another long lost Rosewood resident made a return in "In the Eye Abides the Heart," though it was a brief appearance. Wren Kingston showed up at the very end of Episode 15, spotted by Ezra at the airport while he had a quiet argument with Spencer. Wren has never quite been a regular character on the show. As Melissa's sometime-fiancé, he shows up to creep around Spencer and cause trouble from time to time, but he's never stuck around for very long. His return was definitely a surprise made even more surprising by the fact that he was with Spencer. And what were Wren and Spencer arguing about on Pretty Little Liars?

When Spencer realized that Ezra was watching, she was quick to explain what was going on. Wren was caught in Rosewood on a flight layover and he called Spencer to pass the time (suspect in and of itself, in my opinion), but she had ulterior motives for accepting. According to Spencer, she hadn't seen Wren since before Charlotte was killed and because he helped Charlotte sneak into Radley, Spencer wanted to grill him for information. Unfortunately, Wren was far from forthcoming. However, there could be more going on than Spencer let on. After all, viewers only saw her conversation with Wren from a distance. They didn't actually hear it.

Spencer and Wren weren't having a huge fight by any stretch. Seated on opposite sides of a small table with drinks on hand, it looked more like a disagreement about something. It didn't seem like a casual chat about Charlotte, either. From what Spencer told Ezra, it didn't sound like things were getting heated during her talk with Wren, but from the looks of it there was definitely something going on there.

One popular theory that Twitter has latched onto is that Spencer has an evil twin who is causing chaos in Rosewood with everyone being none the wiser. Her mysterious meeting with Wren seemed to fit this theory: they looked like they were talking about something other than what she told Ezra, and she was acting cagey about being caught. She even told Ezra not to say anything. Why would she do that if she had nothing to hide?

Of course, it's possible that something else entirely is going on. Perhaps Spencer is looking for information about her birth family that Wren could have as a former Radley doctor. Or maybe she was telling Ezra the truth and Wren's appearance was just a fun little Easter egg in the final episodes. Fans (myself included) could be reading into her body language a little too much.

But whatever Wren and Spencer were really arguing about, it's sure to come up again before the show is over.