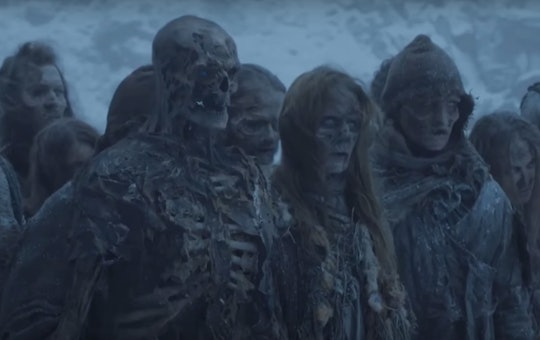 There is no one a new mom feels more kinship with than the walking dead, am I right? Sure, most people watch HBO's massively popular television juggernaut Game of Thrones and think to themselves "Wow, that is a creepy, ice cold, busted army of the resurrected, there." But new moms? They gaze into the flat blue eyes of the dead as they drag their bodies across the tundra in spite of all odds, and think, "Man, I really feel that guy, right now." You may be wondering what wights and new moms have in common, but let me tell you, it's more than you think.

First, a little background on what wights are, and how they came to be. In the television show (because it's moved beyond the bounds of George R.R. Martin's original series of books at this point), wights are undead zombies raised by White Walkers. In Season Six, viewers learned that the Children of the Forest were once battling the first people of Westeros. Their lands were being destroyed, their sacred trees slaughtered, so to combat men, they created the first White Walker, the Night King, by shoving a piece of dragonglass into the heart of a soldier. And that walker had the power to raise the dead in the form of the wight and also make other White Walkers. You know, a bit like giving birth except not at all. But that's not where the similarities between wights and new moms end.