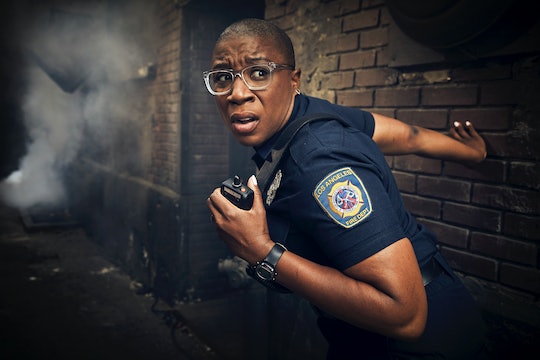 '911' Returns For Season 2 With Some Big Changes

Scheduling for Fox's 9-1-1 has been kind of confusing from the start. It began as a mid-season premiere in January 2018, but then returned for Season 2 in the fall; first it aired on Wednesdays, but then Season 2 premiered a two-parter on Sunday and Monday. So what will 9-1-1's regular time slot be?

It may have taken some rearranging, but it seems like the show has finally found its perfect spot. 9-1-1 will air Mondays on Fox from now on. That Sunday debut on Sept. 23 was just a singular, special event to get fans excited for the new season (and maybe lure some potential viewers from Sunday night football, too). It gave both new and old fans a chance to enjoy two nights of the show without having to wait very long for the intense cliffhanger of Episode 1 to usher in the aftermath of Episode 2. Starting on Sept. 24, you'll be able to find 9-1-1 at the same place and time week after week until the season is done.

The switch to Mondays isn't the only new thing about 9-1-1 Season 2. There have been some changes with the cast and characters that are bound to change the direction the show takes going forward.

Connie Britton was one of the stars of 9-1-1 in Season 1, but she won't be back for Season 2. Series creator Ryan Murphy explained to Deadline that Britton had signed on for one season of the show in the first place, so they were prepared for her departure. "Connie had just come off Nashville, and she didn't want to do another show right away," he said after the Season 1 finale. "I said, 'well, why don't you just do a one year deal,' so Connie has a one-year deal, and we all knew that going in."

However, at the time he was hopeful that she might be back after all. He mentioned that they were discussing the possibility in the wake of the show's good ratings and reviews, saying, "But the show has become such a success, successes are good, and Connie and I both realize that, so we're talking about her coming back in some capacity to Season 2 if we can make her deal work."

It doesn't look like Britton was able to return after all, but viewers shouldn't despair. The show has added a couple of new cast members to fill the void, including Jennifer Love Hewitt as Maddie Buckley. She might be new to the audience, but she's not new to the other characters — she's actually Evan "Buck" Buckley's (Oliver Stark) sister. Ryan Guzman also joined the show as Eddie Diaz, an Army vet turned firefighter.

There may have been a lot of upheaval on 9-1-1 with both the cast and shifting schedule, but it's definitely a show that knows how to handle it. And now it looks like 9-1-1 has achieved some consistency with its weekly airdate, even if the characters are still weathering one bombshell after another.