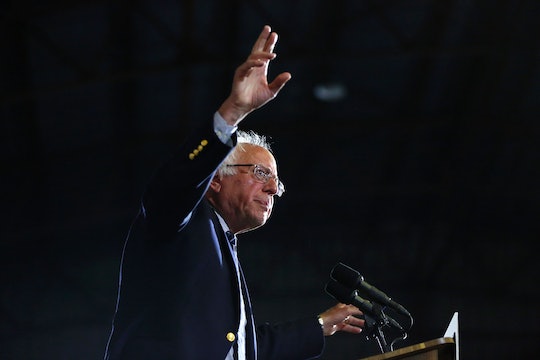 What Will Bernie Sanders Do Next? Don't Expect Him To Fade Away

Over the course of his dramatic and party-altering campaign for the office of Commander-in-Chief of the United States, Vermont Sen. Bernie Sanders ignited a nation. Not literally, of course, but the man won over some of the most devoted supporters of any candidate in the race with his platform of self-described "Democratic socialism" — and even with his nomination concession at the Democratic National Convention on Tuesday, it's really hard to believe that after that level of fervor, Sanders' voice will simply fade from the public discourse. Now that he's officially out of the presidential race, both his fans and detractors are wondering what Bernie Sanders will do next.

"Next Tuesday, we continue the fight," Sanders said at a Santa Monica rally June 7, the night opponent Hillary Clinton became the presumptive Democratic nominee, The Los Angeles Times reported. "We are going to fight hard to win the primary in Washington, D.C., and then we take our fight for social, economic, racial, and environmental justice to [the Democratic National Convention]."

That plan ultimately did not result in the Sanders victory at the DNC that so many had been hoping (or perhaps wishing) for, but that's no reason to think that his respectable quest for justice is anywhere near over. Certainly, with his move at Tuesday's convention gathering, Sanders himself seems ready to keep moving forward.

Sanders — one of the few politicians who has held consistent public views on important issues for his entire career — used his run as a presidential candidate to advocate for policies that would directly improve the lives of who he views as underserved Americans, such as a living wage, affordable housing, solutions to income and wealth disparities, and LGBT equality. Although Clinton has flip flopped considerably over the years, she purports to share Sanders' dedication to promoting equality for all Americans, so it's easy to understand why the two were quick to meet up and help organize the new Party platform together.

After Clinton's ascension to the status of nominee became obvious June 7, CNN commentator Sally Kohn urged Sanders to "end the campaign, but not the revolution." Now that he has, Sanders still has the opportunity — and, it seems, the drive — to fuel the revolution his campaign previously started. Upon returning to Vermont, Sanders will undoubtedly continue to tout his progressive values, including challenging big banks and corporations. It's also likely that his campaign will help fundraise for other progressive politicians in down-ticket races, ABC News reported.

Presidential losers don't automatically disappear into the political sidelines, as evidenced by former Republican candidate and Arkansas Gov. Mike Huckabee, who hosted a successful Fox News show after his failed run in 2008. Al Gore used his 2000 loss as a springboard to call Americans' attention to climate change, winning a Nobel Peace Prize in the process. And let's not forget Hillary Clinton herself, who lost the 2008 Democratic primary to now-President Barack Obama. She certainly didn't let that stop her.

Because he's 74 years old, Sanders failed presidential bid was likely be his only attempt at the White House. But that doesn't change the fact that with his frank discussions and naked outrage about the inequalities in the United States today, Sanders made a huge difference on politicians and residents nationwide. He didn't win a shot at the top spot, but there's still so much work for him to do.