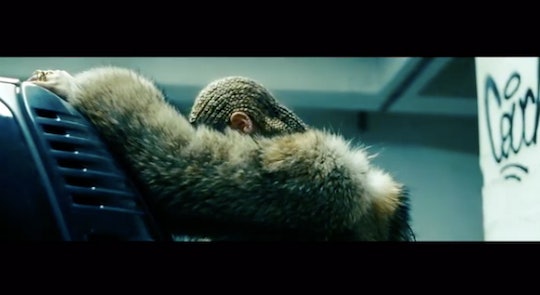 What Will Beyonce Reveal On HBO On April 23? Fans Want To Know What Lemonade Is

Just when fans thought they couldn't wait one more second for new Beyoncé music, the Beyhive was given some relief on Saturday with the release of a teaser. But just what Beyoncé will reveal on HBO on April 23 is anyone's guess. Only one thing is certain — it's going to consumer your Twitter feed, your life, and if you're a fan, probably your entire being. When Beyoncé does something, she does it right. Fans have speculated that it's an album film, and that seems to be the best guess so far. No matter what it is, it's already a lesson in branding, as one Twitter user so aptly put it just after the video made it's rounds. "Yo all Beyoncè did was release a moving pic of her dressed up as Cookie with cornrows +the world stopped again. branding on 1000."

Really, though, she knows how to work her crowd. The official Twitter handle for The Bey Hive claims that they've "sat on it," refuse to "spoil" the surprise, and can't stop thinking about "the looks, the dancing, the story." But they claim it's going "f---" everyone up. That's most definitely a good thing, because if there's anyone I don't mind messing with my emotions, it's Beyonce. She can do whatever she wants.

Releasing an album film before actually releasing an album is not the usual way to do things, but since she started secretly dropping albums and randomly announcing world tours, Beyonce has been doing things outside of the norm lately. Over at Bustle, they were quick to remind the curious (and that Twitter fan) that Beyonce isn't dressed up as Cookie, Taraji Henson's character on Fox's Empire, but that it's the same look from the "Formation" video when she's hanging out of a car in a parking lot. It's possible that Lemonade is going to fill in some of the blanks from the "Formation" narrative. In the teaser, she says "what am I going to do, love, what am I going to do?" and sets the scene for some drama.

But it's all just fan theories for now. That being said, Beyoncè has been planning this Lemonade thing for a while now. There are a few hints spattered throughout her Instagram account, including this image:

And table settings from 29 weeks ago with lemonade themed cocktails and very Pinterest-y lemon candle holders. She's been on this project for a while now, that means, right? The good news is that the world premiere is only one week away, so it won't be a mystery much longer.