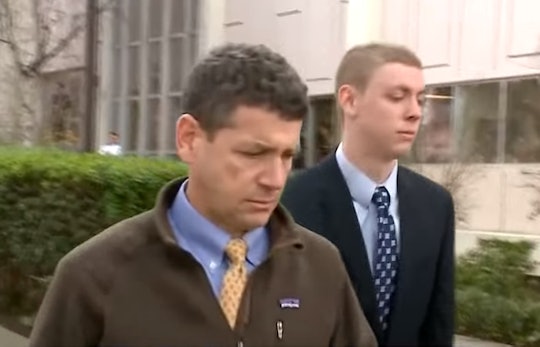 What Will Brock Turner Do Next? He Was Released From Prison

Brock Turner, the former Stanford student convicted of assault with intent to commit rape of an intoxicated/unconscious person, penetration of an intoxicated person, and penetration of an unconscious person, was released from a California jail at about 6 a.m. Friday, according to NBC News, after serving just three months for his felonies. While it's unclear what Brock Turner will do next, one thing is for sure; his life on the outside won't be easy.

Turner's absurdly light sentence, according to the opinions on Twitter, is somewhat mitigated by the fact that he'll have to serve three years of probation and register as a Tier III sex offender for life. That means that, within five days of his return to his hometown of Bellbrook, Ohio, he'll have to report to the Greene County Sheriff's Department to be photographed. Sheriff Gene Fischer told ABC News that postcards will be mailed to Turner's neighbors to warn them that a sex offender has moved to the area. It almost seems unnecessary — who hasn't heard of Turner by now? — but The Daily Beast canvassed the area and found that, incredibly, some residents weren't familiar with Turner or the infamous case in which he was caught digitally penetrating an unconscious woman beside a dumpster. Turner pleaded not guilty to his charges, and released a statement that blamed alcohol — not his behavior — for his actions, according to The Guardian:

At this point in my life, I never want to have a drop of alcohol again. I never want to attend a social gathering that involves alcohol or any situation where people make decisions based on the substances they have consumed. I never want to experience being in a position where it will have a negative impact on my life or someone else’s ever again. I’ve lost two jobs solely based on the reporting of my case. I wish I never was good at swimming or had the opportunity to attend Stanford, so maybe the newspapers wouldn’t want to write stories about me.

Turner will have to re-register with the Sheriff's Department every 90 days, according to the Dayton Daily News, and Fischer told them that law enforcement would "pop in unannounced from time to time." According to CNN, as s registered sex offender, Turner will be barred from living within 1,000 feet of a school or day care center, and must keep law enforcement informed of his comings and goings, his phone number and vehicle information, and even give them his user names and passwords for his email and social networking sites. As part of Turner's probation, he'll have to attend a sex offender management program for one to three years and submit to polygraph tests.

A former student athlete, Turner has been banned from USA Swimming, and from ever setting foot on Stanford University's campus, even as a visitor. Local news station WHIO reported that neighbors began protesting outside Turner's parents' home shortly after his sentencing in June. The Daily Beast was able to find some Bellbrook residents who knew about Turner's case, and they're not happy. "It doesn’t make me comfortable he’s here," said one anonymous woman. Turner may not be incarcerated, but it appears that he's largely unwelcome in society, making his future prospects look pretty grim.