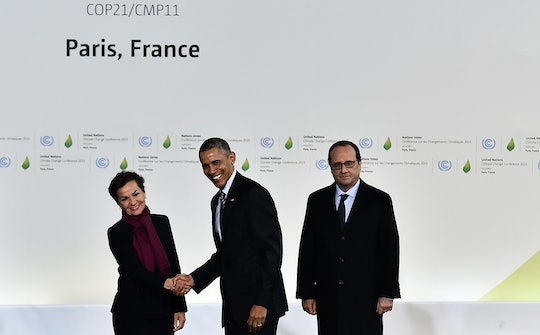 What Will Happen At The UN Climate Talks? 150 World Leaders Meet To Find New Ways To Combat Rising Temperatures

We’ve been hearing warnings from scientists and experts about global warming for years now, and it’s pretty clear that it is a seriously scary issue. The polar ice caps are melting, sea levels are rising, and the consensus seems to be that we’ll all be in big trouble if we don’t do anything about it. But a lot of the time it doesn’t seem like enough is really being done on a large enough scale to actually make a difference. The good news? Leaders from 150 countries are meeting in France on Monday as part of the 2015 United Nations Climate Change Conference. But what is the goal of the UN summit? It's pretty impressive: to negotiate a new global climate change initiative involving all 150 countries that will limit global warming to 2 degrees Celsius per year.

Presidents, Prime Ministers, and other heads of state will be meeting for the day to introduce different strategies to meet the UN’s goal. Afterward, negotiators from 195 countries will work together to come to an global agreement about the new initiative before the two-week deadline. Monday’s meeting is being hosted by French president François Hollande and the United Nations Secretary-General, Ban Ki-moon. All 150 leaders, including President Barack Obama, U.K. Prime Minister David Cameron, and German Chancellor Angela Merkel, will be giving short speeches outlying their countries’ planned efforts.

What's On The Agenda?

So what kinds of climate change strategies will be discussed at this conference? And can they really make a difference to combat the disastrous effects of climate change? Here are some of the topics that the heads of state will be talking about:

Will It Make A Difference?

But as encouraging as these talks seem, not everyone is convinced that enough good will come out of them. Critics have already noted the potential for the interests of developing countries to be totally overlooked, especially given that the 2 degrees Celsius emissions cap that the entire conference is based around will actually still be too high to prevent disastrous conditions in developing nations who already struggle with drought and food security. Experts estimate that a cap of at least 1.5 degrees Celcius is needed to effect global change in a meaningful way — and they also say that the conference’s current plan would only realistically lead to a 3 degrees Celsius increase, not 2 degrees.

At the very least though, it is encouraging to know that something will be done as a result of this conference, because we know that continuing on as-is will be an environmental nightmare. Hopefully this global effort will be a new start to thwarting some of the damage scientists are predicting to be inevitable before it’s too late to do anything about it. (Fingers crossed.)