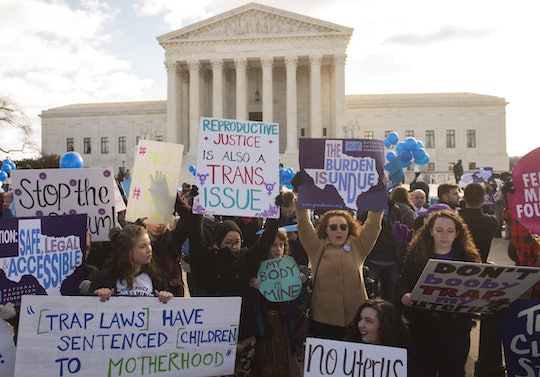 What Will Happen To Abortion Access If Texas Wins The Supreme Court Abortion Case?

In the midst of presidential primaries and the recent death of Supreme Court Justice Antonin Scalia, there's one big story that's been largely buried — and one that has the potential to affect every woman in the U.S. It's the case of Whole Woman's Health v. Hellerstedt, a court case challenging two Texas provisions regarding abortion clinic requirements. What will happen to abortion access if Texas wins its Supreme Court abortion case? On Monday, the Supreme Court will hear oral arguments, and the fate of abortion access on a national scale lies in the hands of the eight remaining justices hearing the case. Here's exactly what could happen to women's abortion access everywhere should Texas come out the winner.

In an interview with The New York Times, president of the Center for Reproductive Rights Nancy Northup said, “The Whole Woman’s Health case will be a turning point in the battle over access to abortion services. The decision is likely to have an effect on a whole range of laws that pretend to be about women’s health but actually are designed to close clinics.” Texas is one of nine states that mandate similar requirements for abortion providers, in terms of physician hospital admitting privileges and putting abortion clinics in the same category as ambulatory surgical centers. Thus, Whole Woman's Health v. Hellerstedt has the potential to affect broad swaths of the country.

Here's the Texas abortion case in a nutshell. In 2013, Texas passed House Bill 2, requiring two provisions of abortion providers in the state that ultimately restrict women's access to abortion clinics as opposed to making abortions safer, as Texas legislators argued. The first provision required that abortion providers must have admitting privileges to a hospital within 30 miles of the clinic. The second provision requires abortion clinics to meet the same safety, health, and staffing requirements of ambulatory surgical centers.

Texas H.B. 2 totally managed to skirt Roe v. Wade by not targeting the women receiving abortions, but rather, the physicians and facilities that provide abortions. The law was upheld by the United States Court of Appeals for the Fifth Circuit in 2014. The Supreme Court granted a temporary stay of the law in June last year and, in November, the highest Court in the land agreed to review the Fifth Circuit's ruling.

The Guttmacher Institute explained in a statement Tuesday why provisions like H.B. 2 constitute "TRAP" laws — Targeted Regulation of Abortion Providers:

Most requirements apply states’ standards for ambulatory surgical centers to abortion clinics... These standards often include requirements for the physical plant, such as room size and corridor width, beyond what is necessary to ensure patient safety in the event of an emergency.

Several states mandate that clinicians performing abortions have relationships with local hospitals — requirements that do little to improve patient care but that set standards that may be impossible for providers to meet.

If the Supreme Court sides with Texas, Texas could lose nine or 10 abortion clinics, leaving exactly zero abortion providers west of San Antonio. But should the eight justices rule in favor of Whole Women's Health, then the case before the Supreme Court today doesn't just impact the 19 abortion providers in Texas — but every abortion clinic held to these and similar provisions in nine other states, which means clinics across the country could close.

Oral arguments in Whole Woman's Health v. Hellerstedt will be heard at the Supreme Court on Tuesday. The justices are expected to vote on Friday, but their ruling and dissenting opinions — and ultimately, the outcome — may not be known until June.