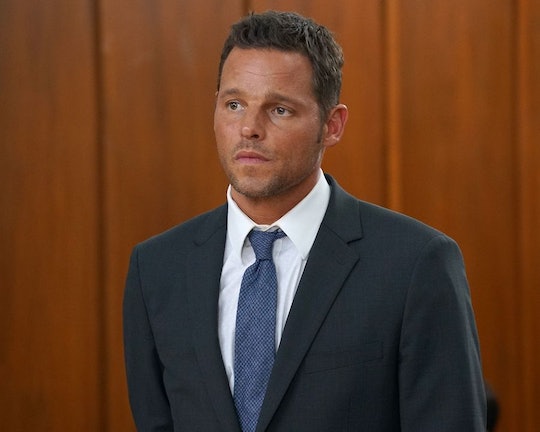 What Will Happen To Alex On 'Grey's Anatomy'? He's In Serious Trouble

In the past 12 seasons of Grey's Anatomy, we've seen Alex grow up from an immature, sexist surgical intern to a responsible, pediatrics attendee. However, all the growth we've seen in Alex went down the drain in the Season 12 finale when he beat DeLuca to a pulp. Believing Jo and DeLuca were hooking up in the apartment Alex and Jo shared, Alex lost it, leading DeLuca to be brought to Grey Sloan hospital and almost losing his eye, which would've ended his career as a surgeon. So what will happen to Alex on Grey's Anatomy now that he's turned himself into the police? He may be going to prison.

The truth is, Alex got very lucky here. If DeLuca's CT hadn't come back clean or even worse if DeLuca died from his injures Alex would be facing even more serious charges. As it is Alex can and most likely will be charged with aggravated assault. If Alex's is found guilty of first degree assault he could actually receive a life sentence, although this seems very unlikely since the show would definitely be less fun to watch if Alex spent the rest of it in prison. It's more likely that Alex will be charged with second degree assault, in which case he could serve up to 10 years.

Thankfully Alex has Meredith on his side and she'll try everything to get DeLuca to drop the charges but it'd be very surprising if DeLuca does. Besides even if DeLuca dropped the charges Alex could still be charged by the state and if somehow that doesn't happen and Alex walks away scot free it's highly unlikely he'll have a job to return to. Beating up a fellow employee is definitely frowned upon and there's no way Dr. Bailey would just allow Alex to come back after what he did to DeLuca. At best Alex may be able to find a job at another hospital but if that's the case we'll probably be seeing less of Alex in the future.

Whatever happens Alex is definitely in serious trouble. He messed up big time and doesn't really have much of a defense for his actions. We'll just have to wait and see how this all plays out but right now things do not look good for Alex Karev.