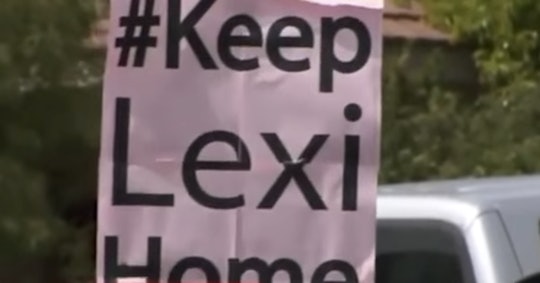 What Will Happen To Lexi Of The "Save Lexi" Campaign? The Court Decision Is Being Challenged

The recent coverage of the "Save Lexi" campaign has brought issues within the foster care system to national attention. According to the federal Indian Child Welfare Act, Native American children are to be returned eventually to a biological family member or a member of their tribe. Citing that act, a court decided that Lexi, who is 1/64th Native American, would be removed from her foster home and live instead with relatives in Utah. Her foster parents, Rusty and Summer Page, are challenging that decision. So, what will happen to Lexi of the "Save Lexi" campaign?

Lexi lived with Rusty And Summer Page for four years in their home in Santa Clarita, California, between the age of 2 and 6. When speaking to Fox 11, Rusty Page emphasized her attachment to their family. He said, "Lexi doesn't know another home. She finally knows what mom and dad means and they want to take that away from her. And we can't stand idly by while that happens. As hard as it is, and as scary as it is to go up against the people we going up against, we're putting everything on the line. A mom is not going to sit back, a dad is not going to sit back. We're going to fight until the very end."

In an attempt to keep Lexi in their family, Rusty and Summer Page filed a request with California's Second District Court of Appeals to challenge a decision made by the Los Angeles County Department of Children and Family Services. As was shown from the scores of supporters outside of the Page's house on Monday — the day Lexi was picked up — there are many people who support the Pages' actions. But, the question is, will their fight hold up in court and what effect will it have on Lexi's life?

According to NBC News, the Pages have been fighting for legal custody of Lexi for years, which prolonged her return to biological family members until now. In the same vein, it seems that their latest legal challenge will only prolong her from achieving any kind of stability. Court cases, especially custody battles, are known for being drawn out and emotionally exhausting for all parties.

In the interim, the court's decision stands and Lexi will go to her relatives' home in Utah, where she will be reunited with her biological sister. Though the Pages requested she return to their home while the decision is being challenged, the Choctaw Nation opposed that request, according to court records. They said in a statement,

We appreciate the concern for Lexi and want to assure everyone she is in a safe, loving home with her relatives and her biological sisters. We, as a tribe, are required to follow federal law. The foster family filed appeals three times to keep Lexi, delaying the reuniting of Lexi with her relatives.

There has been a lot of public outcry and action for the "Save Lexi" campaign, which aims to return her to the Pages' home. There is an online petition that has around 78,000 signatures, a GoFundMe page, and the family organized a protest outside the U.S. Courthouse in Los Angeles to try to rally Sen. Barbara Boxer to their cause. While these actions have gained groundswell, the court stands by its decision to act in the best interest of the child. For the time being, Lexi will remain in Utah with her biological relatives.