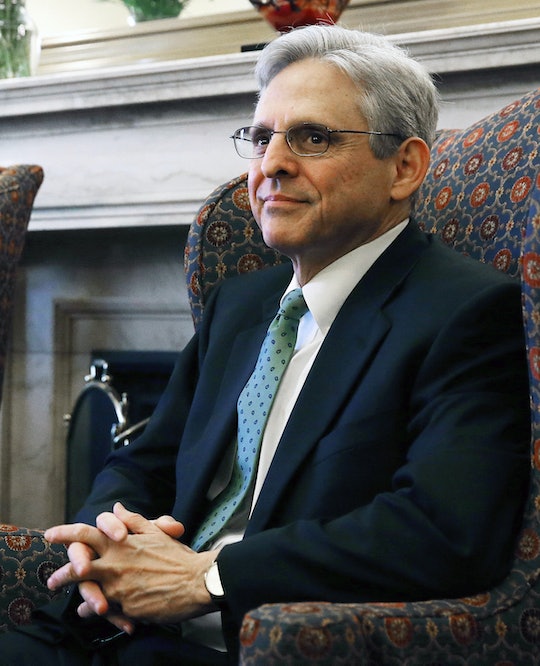 What Will Happen To Merrick Garland Now? The Senate Still Refuses To Consider Him

Just as they promised, a number of Republican senators are steadfastly ignoring President Obama’s nomination of Judge Merrick Garland to the Supreme Court, refusing to begin the hearing process or even meet with the candidate. That decision has been widely criticized, as it is seen by many as senators choosing not to do their jobs, but Republicans — most notably Senate Majority Leader Mitch McConnell — argue that waiting until after the November presidential election to appoint a new judge is the only fair option, as it would mean that the candidate would be nominated by whomever has just been voted into office (assuming, of course, that the person elected is a Republican, since, you know, Obama was already voted in by the majority of Americans — twice). So what will happen to Merrick Garland now?

According to USA Today, the Senate began a two-week recess on Friday, at which point senators returned to their home states. That has opened up the floor to debate and lobbying to occur on both sides — for and against pushing the Senate to meet with and vote on Garland, something which normally happens over a few days following a nomination, according to the Guardian. The refusal to do even that is unprecedented: Senate hearings have always taken place, whether or not it ended in a confirmation of a candidate.

The good news for Garland is that President Obama, for one, appears to have no intention of backtracking on his decision to nominate him, regardless of the pushback. According to Slate, White House Chief of Staff Denis McDonough told Fox News that Obama “will stand by him from now until he is confirmed and he’s sitting on the Supreme Court.”

But, despite that endorsement, it is entirely possible that Obama might not actually have anything to do with the appointment of the next SCOTUS judge at all. If a majority of senators back McConnell’s decision (and, given that there is a Republican majority, it’s entirely likely), then the next president would be making their own nomination in early 2017, after taking office, according to the New York Times. If a Republican candidate becomes president, then Garland would surely be out of the running. But if a Democrat wins, it’s possible someone more progressive than Garland (who, at best, is pretty moderate) could end up taking Scalia’s seat. Regardless, that would likely mean that the Supreme Court would remain with only eight justices until the middle of the year.

Other possible (but less likely) outcomes for Garland? He could be reluctantly confirmed in a “lame-duck” session (when Congress meets during the period of time between a new president being elected and actually being sworn into office), if it looks as though the new president’s pick would be less favorable to Republicans than Obama’s Garland nomination. According to Slate, McConnell has said that’s unlikely, claiming "It'd be hard to be more liberal than Merrick Garland." But the New York Times has said that he’s admitted that he could change his mind — which would make a lot of sense if the next president is Clinton or Sanders.

Another unlikely outcome? Obama could appoint Garland as an appointee during a Senate recess. But Obama has already said he wouldn’t do that, and, according to the New York Times, the Senate has planned on meeting occasionally during recesses anyway to attempt to ensure he doesn’t go back on his word.

The bottom line? Things don’t look that great for Merrick Garland. Despite being a very well-liked judge with a respected voting record, the Republican-Democrat head-to-head standoff could very well keep him from being the one to fill the empty SCOTUS seat.