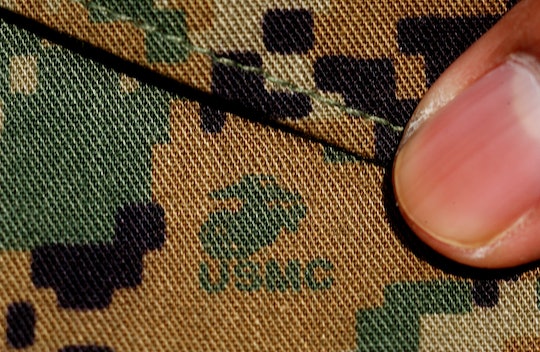 Recently, a shocking allegation rocked the U.S. Marine Corps. According to reports, multiple male Marines may have allegedly shared nude photos of their female colleagues online without their consent. So, what will happen to the Marines who allegedly shared those nude photos? It's hard to know exactly what the consequences will be, but at least one person connected to the photo sharing has reportedly already been disciplined, as the Marine Corps continues its investigation.

Back in January, someone allegedly posted a link to a shared drive in a secret Facebook group called Marines United (not an official Marine Corps-affiliated group), which has over 30,000 members. The drive reportedly contained photos of various female Marines and former Marines, pictured nude and semi-nude, along with their names and units, reportedly accompanied by derogatory comments. A Marine veteran (who also received the Purple Heart) reported the allegations, which according to CNN may involve dozens of Marines, although other outlets have reported the number of those being investigated as allegedly being in the hundreds. The veteran who published the allegations has since received death threats targeting him and his family.

Romper reached out to the Marine Corps and NCIS for comment, but did not immediately hear back.

Now that these allegations have been brought to light, what's being done about them? The investigation is currently ongoing, but already, some swift action has been taken.

A military official told CNN that one man, an IT subcontractor, has already been disciplined and will no longer be able to work on contracts involving the Marines. And higher-ups in the military are indicating that they plan on taking the investigation seriously: As CNN reported, although he couldn't comment on the specifics of the case since it was ongoing, Marine Corps spokesman Capt. Ryan Alvis said,

The Marine Corps is deeply concerned about allegations regarding the derogatory online comments and sharing of salacious photographs in a closed website. This behavior destroys morale, erodes trust and degrades the individual.

For anyone to target one of our Marines, online or otherwise, in an inappropriate manner, is distasteful and shows an absence of respect.

In the meantime, as the investigation continues, those sharing the photos are not the only ones facing consequences. The female Marines and vets whose photos were posted without their consent are already suffering the emotional repercussions: One woman whose photos were posted to the group without her permission, Marine Lance Cpl. Marisa Woytek, told The Washington Post that she was "never reenlisting" after the sexual harassment.

If the allegations turn out to be true, here's hoping that those involved are faced with appropriate consequences. In the meantime, as officials have stated, the Marine Corps, cooperating with NCIS' investigation, continues to take the allegations very seriously.