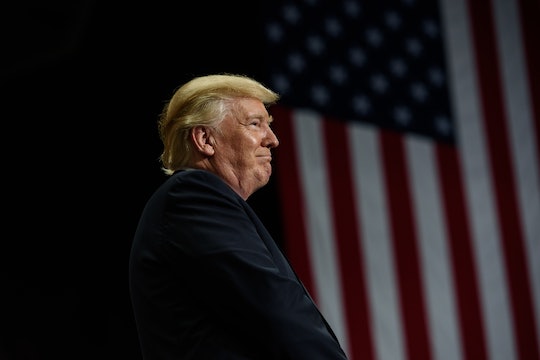 What Will Happen to Transgender People Currently Serving In The Military? Trump Just Altered Their Lives

In his trademark way, this morning, President Trump declared in a series of tweets that "The United States Government will not accept or allow transgender individuals to serve in any capacity in the U.S. Military." It's a huge hit for the transgender community, but it also begs the question, what will happen to transgender people currently serving in the military?

Just over one year ago, the Department of Defense (DoD) lifted the long-standing ban on transgender individuals from serving in the United States Military. The lift on the ban that forbade trans soldiers from openly serving was already active, with final parts of the law set to go into place July 1, 2017. However, Defense Secretary Mattis announced in the end of June that he was implementing a six month delay on the full rollout of the plan, citing the need for review, leaving the trans members of the military in limbo. The decree from the White House today comes just one day before the DoD deadline for the military to update its medical services to include services for the needs of its trans population.

Today, on the 69th anniversary of Truman's executive order which desegregated the United States Military, the President cited "costs and disruption" associated with transgender people serving in the military as his reason for banning trans individuals from serving in United States Armed Forces. This is in spite of the Rand Corporation study that thoroughly examined the implications of the estimated 1,320–6,630 transgender service members in the active component which found that the cost of treating and employing the trans community in the United States Military was relatively low, and had a negligible impact on readiness.

So what will happen to the transgender people currently serving in the military? According to Reuters, the Pentagon has directed all questions regarding the ban to the White House for clarification, leading people to believe, does anyone know how to go forward?

It is unprecedented that a group of people faithfully serving the military would be unilaterally banned after achieving the full rights and responsibilities of service members allowed to live openly regardless of their gender orientation. However, a tweet, even one under the guise of an official decree is not law. There are steps the President must take in order to make this happen legally, much like the ban on Muslims entering the country. If the President signs an executive order, groups like the ACLU have already stated their intent to sue and seek an injunction to stay his hand.

As of this moment, it appears as though the military has yet to receive any guidance as to how they are to proceed. Because the Pentagon has referred journalists to the White House for clarification, the American public is left at guessing until more information is forthcoming. However, if this treated like Don't Ask Don't Tell (DADT), each trans soldier will be given a hearing, and then discharged without pension and a mark will be placed on their service record. It was not an honorable, but general discharge which read "mentally unfit for service."

Each dismissal under DADT cost roughly $53,000 per soldier dismissed, and disproportionately affected female soldiers, according to military blog, Stripes.com. If every trans soldier currently serving in the military faced a similar dismissal and the costs related to it, then the military would be paying out over 350 million dollars in charges related to dismissals. This is a stark contrast to the estimated additional 8 million dollars annually it is estimated to cost the military to treat and supply services to its active trans soldiers.