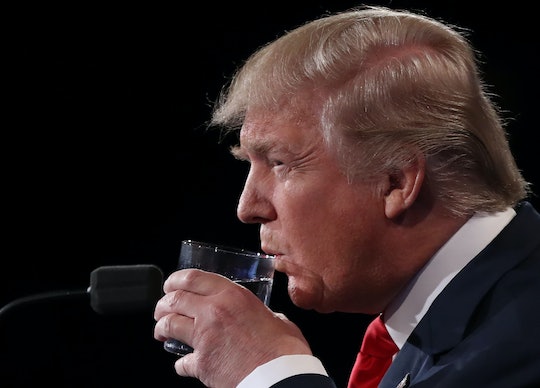 What Will Happen To Women's Healthcare Once Trump Becomes President? He Has Some Ideas

When it became clear that then-GOP nominee Donald Trump would ascend to the highest office in the United States Tuesday, the global ramifications were immediate: The stock market faltered significantly before recovering the next day, and at home, Democrats lamented the Republican-held Congress. But for many women, some of the potential ramifications were much more personal, and — based on the Republican president-elect's past comments about what would happen to women's healthcare once he assumed office — unlikely to similarly right themselves after his planned Jan. 20 inauguration. In fact, Trump and his running mate, Indiana Gov. Mike Pence, seem committed to curtailing women's bodily autonomy and access to reproductive care so severely that many are encouraging one another to take advantage of available contraceptive options now, before it's literally too late.

Because now that a Trump presidency is really, truly, actually happening, America, women's healthcare is seriously in trouble — and the president-elect has pledged to begin dismantling what should be a fundamental right from day one. He'll start, he says, by repealing the Affordable Care Act, President Obama's signature healthcare initiative that passed in 2009. Between 16 and 25 million people could wind up without health insurance if he's successful, according to The Commonwealth Fund, with low-income people disproportionately affected. He would then implement his own healthcare plan, which would likely make it much harder for women to get safe and legal abortions, effective and affordable birth control, and preventative care, according to The Guardian.

Case in point: Right now, the Affordable Care Act, or Obamacare, guarantees women free birth control. If Trump were to abolish that, the great progress that Obama made in that arena would go poof. Which is why some leading voices on the left are getting out the word that it's crucially important that sexually active women who don't want children yet (or ever) get an intrauterine device.

The thinking goes that the IUDs can last years, and the right one can certainly weather the coming administration, which could usher in another era in which birth control pills would likely become too expensive for some women to purchase each month, leading to the increase in the need for abortions, which may also be much less readily available and accessible.

Trump is now vehemently pro-life and squarely against Planned Parenthood, despite recognizing that vital services it provides for those it serves. At a primary debate in February, Trump said as much:

Objectively speaking, this does not sound like a man who's at all interested in safeguarding the wellbeing of at least half the nation's population. That makes Trump and Pence a team that's totally simpatico on that pesky issue, as Pence inadvertently caused an HIV outbreak in his state when he closed the only entity providing the HIV prevention, intervention, and counseling services in county experiencing a heroin epidemic — a Planned Parenthood — and signed into law an abortion bill to stop women from seeking the procedure based on the fetus’s race, sex, or diagnosis of disability.

That's not even the worst part. Trump said just weeks before the election that he would appoint only conservative, pro-life justices to the Supreme Court with the ultimate goal of overturning Roe v. Wade, meaning that individual states would once again decide on the legality of abortion within their respective confines. In short, a woman's right to choose would regress more than 40 years.

It sounds like a dystopian nightmare, but it's descending upon us. And the only way out is through it.