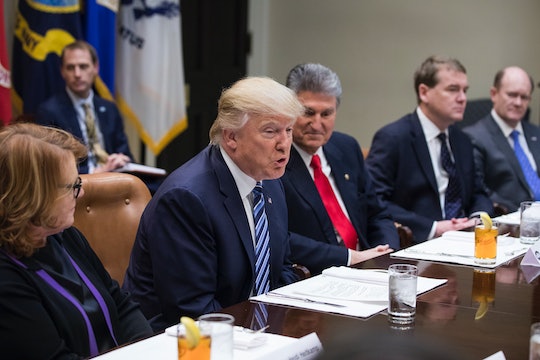 Here's Where Trump's Travel Ban Will Go Next

On Thursday night, President Donald Trump was dealt yet another loss regarding his highly controversial travel ban he signed into order on Jan. 27. According to The New York Times, a federal appeals panel consisting of three judges issued the ruling that Trump's ban was unconstitutional and would remain blocked. This loss comes after Trump's ban was initially taken to court Feb. 3, when Judge James L. Robart placed a temporary block on the regulations. Now, though, with this most recent ruling, the question remains: what will happen with Trump's travel ban next? In short, Trump won't be giving up just yet.

More Like This
Meghan Markle Reportedly Doesn't Want "A Big Baby Shower" As Her Due Date Nears
Everything You Need To Know About The Proud Family Reboot Coming To Disney+
Bindi Irwin Has Been Sharing The Cutest Photos Of Her Daughter
Wait, Did The Government Actually Do Something For Parents?

The ruling, administered by United States Court of Appeals for the Ninth Circuit, in San Francisco, upheld Robart's decision, and refused to allow Trump's travel ban to be reinstated. However, as Trump's Twitter feed will tell you, he isn't done with fighting this fight. And, technically, he doesn't have to be. Because now, Trump and his team have several options for what to do next in their quest to temporarily block immigration from those seven majority-Muslim countries. While Trump's presidential track record so far seems to point to the fact that he might just decide to sign off on a new executive order, his options to take this to a higher court are (clearly) what appeals to him.

Most likely, as it seems his response to the ruling on Twitter last night points indicates, Trump will likely go to the Supreme Court with an appeal, in which Trump claims he should win "in my opinion, very easily,” according to The New York Times.

And while we have no word as of yet in terms of the White House's next move, Trump's administration has moved fairly quickly with this case so far, so it wouldn't be a surprise for them to begin filing for an "emergency application" any day now. And with such a high priority attached to this case, the Supreme Court would likely have a ruling delivered within a few weeks. If that is the case, it's highly likely that Trump's ban would remain blocked by the court. Liberal-leaning justices and conservative-leaning justices probably will not be swayed in the other direction. And if a tie does occur, the appellate court's decision will remain.

However, Trump could also work his way around the Supreme Court, and head straight back to Robart, as his ruling was, in fact, a "temporary" restriction. Played correctly, the Trump team could actually file for a preliminary injunction, which would mean that, if granted, Trump's ban would be reinstated until a Supreme Court hearing at a later date.

While all this legal jargon may be confusing, the gist of it is that Trump isn't happy with this latest development, and is expected to start fighting it as soon as possible.