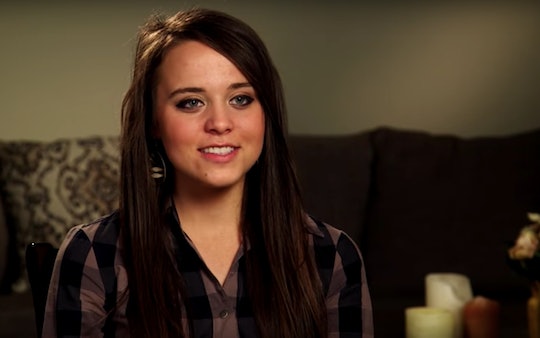 As any fan of the Duggar family knows, the ever-expanding brood likes their traditions, especially when it comes to their alliterative names. Jim Bob and Michelle Duggar have named all their children something that started with the letter J, but, interestingly enough, their kids haven't exactly carried on that tradition. Most recently, fans seem to be wondering what Jinger Duggar will name her daughter as her due date gets closer. Well, as it turns out, there's one particular fan theory out there right now that's both pretty hilarious and kind of clever.

Now, it's no secret that the Duggars tend to name their children something different and unique. In fact, many of the younger generations of Duggars have leaned towards Biblical names for their children — most recently, Joy-Anna Duggar named her son Gideon — so guessing what someone in the famous family will decide to name their child can be a pretty intense guessing game.

However, there's one popular fan theory about what Duggar will name her daughter, as In Touch Weekly reported, and it revolves around another reality television family. Or rather, their world-famous market. Yes, you guessed it, based on how much Duggar and her husband, Jeremy Vuolo, seem to love going to Waco, one fan surmised on Reddit that the couple might go so far as to name their firstborn "Magnolia." Or at least something like it.

On a Reddit thread full of baby name guesses for the expectant couple, user KimBobUn suggested a list of baby names for the happy couple, and while a few were pretty reasonable, others — like Pickles Hairspray Vuolo and Surreal Precious Vuolo — were clearly just for fun. But one of the more notable name suggestions on the list had to do with one of Duggar and Vuolo's favorite things: HGTV's Fixer Upper.

OK, so something like Joanna Chip Magnolia Vuolo probably won't be the name that the couple decides on, but you never know. After all, the couple has made it clear that they're big fans of the HGTV stars. "Anytime we’re driving to North Texas, #magnolia is a mandatory pit-stop," Vuolo wrote in a recent Instagram post of the couple, hinting that they had may have been there to visit more than a few of times. Seriously, Duggar and Vuolo seem to travel to the Magnolia Market any chance they get, and who could blame them?

Fixer Upper is a hit show, and for good reason, although it's officially wrapped up its final season. The show's hosts Chip and Joanna Gaines are charming, talented, and entertaining. And some of the stars of Counting On seem to agree. Duggar and Vuolo definitely love the Gaines family and their many business endeavors, but fans shouldn't bet on them naming their daughter Magnolia. In fact, it shouldn't be surprising if the couple hasn't even chosen a name yet.

As Duggar told Us Weekly back in March, the couple hasn't exactly been going hard on baby prep. "At this point we haven’t done too much prep," she told the publication last month. "Now that I’m halfway through my pregnancy, we haven’t really collected anything. A friend of ours had some stuff they were getting rid of, so that was really nice because they were able to give us baby swings and things like that that we needed, but we haven’t started on anything as far as prep for the baby."

The young couple probably hasn't even settled on a name yet themselves, but if they have, then it's their business when they want to share it with their fans. And as cute (and fitting) as Magnolia would be for their daughter, it's mostly just a dream, surely. Most fans seem to think that Duggar and Vuolo will either choose some kind of Biblical name for their daughter, or something simple and not too flashy. Emma, Grace, Sophia, and Abigail are all popular suggestions on the Reddit thread.

Really, though, fans are just excited that Duggar and Vuolo are getting ready to welcome their daughter into the world this summer and the name will simply be an added bonus when the time comes.