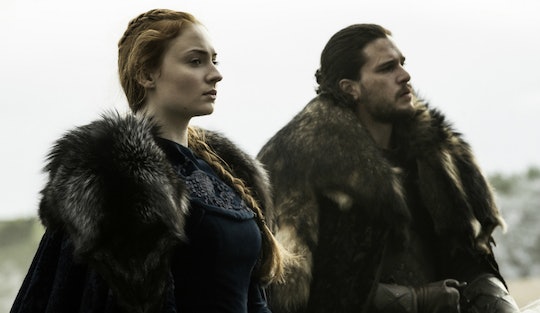 What Will Jon & Sansa Do Next On 'Game Of Thrones'? They'll Want To Find Their Siblings

On Sunday night, the "Battle of the Bastards" finally happened on Game of Thrones and thanks to Sansa, with the help of Littlefinger, Jon Snow won back Winterfell. Although many lives were lost (R.I.P. Rickon and Wun Wun) the most important defeat was that of Ramsay Bolton. Jon almost beat him to death before he realized killing Ramsay should be Sansa's job, and kill him she did. Turning his own hounds on him, Sansa finally got her revenge on Ramsay, but now that their big battle is won what will Jon and Sansa do next on Game of Thrones?

Jon and Sansa have finally returned home, and although it's with much less than what they left with, having Winterfell back in Stark hands is still a major accomplishment, and for a while it was Sansa's primary goal. Now that she's succeeded, she'll most likely want to find her other two siblings, the only family she and Jon really have left (excluding Benjen, who they don't know is alive yet). Although Sansa will probably want to leave immediately to look for Arya and Bran, Jon will probably hesitate. They just got Winterfell back and surely the Lannisters (and the Freys) won't be happy about that. Jon will most likely want to fix their relationships with the other houses in the North and make sure no one tries to take their home again.

However, just as Sansa was able to convince Jon to fight for Winterfell, there's no doubt she'll convince him finding their siblings is even more important. Hiding out in Winterfell will not be enough for Sansa. Now that she's finally got her revenge and a taste of what it feels like to have power, she's not going to want to sit around waiting for something else to happen to her; she's going to make things happen.

The first thing Sansa asked Brienne about when she was rescued was if she knew where Arya was. Sansa and Arya haven't seen each other since Season 1 and although they didn't have the best relationship when they were younger they're still sisters and Sansa wants to find her. Even if she doesn't know where to start, Sansa won't quit until she gets her little sister and brother back and there's no doubt Jon will help her, because as he said, they're no longer alone anymore. They have each other.