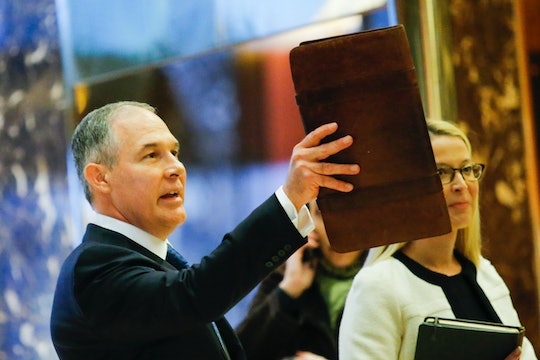 What Will Scott Pruitt Do As EPA Head? He's Not The Agency's Biggest Fan

If and until Pruitt takes office next year, it is unclear exactly what he will do, at least in terms of his own personal agenda — but as the head of the EPA, Pruitt will have an incredibly important job description.

The role of the EPA is to make sure Americans are "protected from significant risks to their health in the environment" which they live in, according to the EPA's website. In addition, the EPA seeks to inform Americans on things potentially hazardous to their health, ensure that laws protecting the health of Americans is enforced, and provide accurate information on health risks to everybody. The EPA plays a major role in crafting national efforts to reduce environmental hazards and protect the resources we need, such as clean air and water.

As the EPA administrator, Pruitt would be the leader of these efforts and would serve as the face of the agency for the Trump administration. However, it is unclear what he will do about these things as EPA head based on his current relationship with the EPA.

Pruitt is not the biggest champion of the EPA as it currently stands. According to The New York Times, Pruitt is "a key architect of the legal battle" against Obama's current climate change and global warming policies. Therefore, it is likely that Pruitt will go against any environmental policy left by the Obama administration. According to The Washington Post, Pruitt has spent "much of his energy as [Oklahoma] attorney general fighting the very agency he is being nominated to lead." Specifically, Pruitt is suing the EPA over the agency's clean power plan and sued the EPA over the agency's regulations to "curtail methane emissions." As The Times reported, Trump has expressed his own distaste for the EPA, pledging on the campaign trail to shrink it or get rid of it altogether.

With both Trump and Pruitt's major distaste for the EPA combined under one administration, there is no telling what will happen, especially with with Pruitt in charge. Pruitt has, according to The Times, worked with some of the largest oil and gas companies. His relationship with these companies could signify less of an emphasis on "clean energy" and could mean those focused on protecting the environment could face conflict with Pruitt and his decisions.

According to Inverse, Pruitt had this to say about the EPA in a speech to the Federalist Society:

With Pruitt's stances running so counter to many progressive global warming policies, and climate change in general, it is obvious he will head a very different EPA from the one Americans have seen over the past eight years.