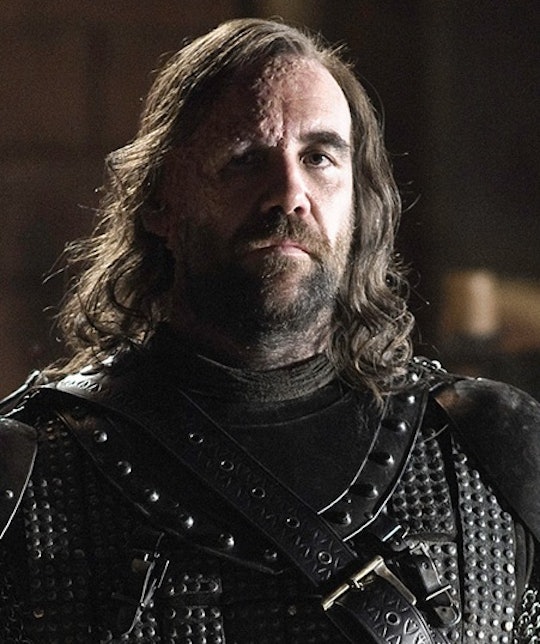 What Will The Hound Do Now On 'Game Of Thrones'? He Should Be In King's Landing

Now that The Hound has returned to Game of Thrones in the most badass and perfect way possible, fans can't help but wonder what his next move will be. The important thing is that he's actually alive at all, so what will The Hound do now? As anyone who is obsessed with Game of Thrones will tell you, he'll be participating in Cleganebowl 2016, making everyone happy and leading the hypetrain to that trial by combat we're all waiting for. The short answer for what The Hound will get up to now, since all of Septon Meribald's men were slaughtered, is to immediately get to those mysterious riders and get some payback.

And we would expect nothing less than that from Sandor Clegane, who has always been a sort of hero in disguise. It's also right on the heels of hearing Meribald's speech about redemption and becoming something more and better than what he used to be. As fans of Game of Thrones can attest, seeing The Hound on the verge of really turning things around was a full circle moment. That's not to say it's particularly surprising, since he has a history of having a soft spot for people in trouble, such as poor Sansa in Season 1 of Game of Thrones.

Of course fans are in a serious tizzy over Cleganebowl, now that we know The Hound is alive and well and plenty capable of fighting. You don't chop wood for months without getting even stronger than before. But before Sandor makes his way to King's Landing and gets into it with his big bro, who is also alive, he's got to become himself again. That's not to say he'll totally throw out what Septon Meribald has been trying to teach him and the other brothers, but there's no way The Hound will find real peace or be some gentle warrior.

Judging by how the promo for Episode 8 of Game of Thrones shows us the shot of Cersei demanding violence, with The Mountain standing guard on one side of her. With the reintroduction of The Hound, it leads us to believe that we are that much closer to Cleganebowl and The Hound going south to get to King's Landing. And it makes perfect sense that he would want to fight for The Faith, if he really does want to be good, as Meribald's speech urged him and the other brothers to do.

But before he fights for The Faith, he'll likely be getting revenge on Septon Meribald's attackers, and then The Hound will have nowhere else to go but south. That trial by combat isn't going to fight itself, right?