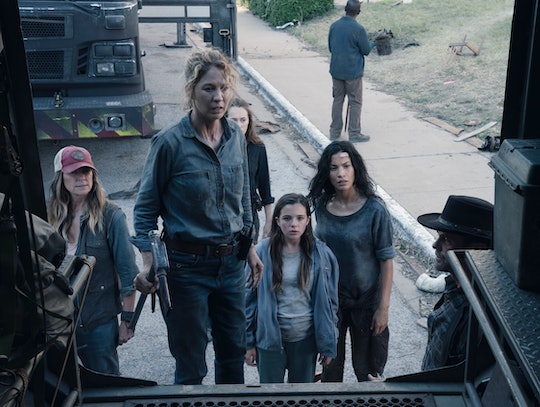 Everything You Need To Know About The Third 'Walking Dead' Series

It’s hard to believe that it’s going on 10 years since the first episode of The Walking Dead aired on AMC in 2010. Both the series and the graphic novel have come so far, including the addition of a spin-off series titled Fear The Walking Dead. Now, AMC is ready to expand the TWD universe even further by adding a third series to the franchise. So, what will the new Walking Dead series be about?

While there are only a few short details about the latest member of the TWD family, they are pretty exciting nonetheless. For example, according to a press release by AMC, the series will focus on two female protagonists. The two young women are part of the first generation to come of age in a post-apocalyptic world, the press release reads, something that has just barely been touched on in the two already existing series. Based on the small description released by AMC, it doesn't seem likely that the third series will be in any way connected to The Walking Dead or Fear The Walking Dead. For now, at least.

Here's the full series synopsis, as released by AMC on Monday, April 8, below:

The third series in a franchise that includes the global hit series The Walking Dead and Fear the Walking Dead will feature two young female protagonists and focus on the first generation to come-of-age in the apocalypse as we know it. Some will become heroes. Some will become villains. In the end, all of them will be changed forever. Grown-up and cemented in their identities, both good and bad.

Again, as previously mentioned, there is no reason to believe this new series is in any way attached to The Walking Dead or Fear The Walking Dead aside from existing in the same world. But will they always be disconnected from each other? Not necessarily, especially when you consider that Fear The Walking Dead started out the same way — set in the same world with zero ties to Rick Grimes and his crew on TWD. However, five seasons later, the shows are connected thanks to a large time jump and the crossover of TWD's Morgan, portrayed by Lennie James. Basically what I'm trying to say is that it's not completely out of the realm of possibility.

What certainly seems interesting about the new series is the idea of watching two leads maturing in a post apocalyptic world. Sure, we watched Carl Grimes grow up on The Walking Dead, as well as Enid and Henry, but with so many other characters to focus on it was hard to see how this really, truly affected them as teenagers. The same can be said for Alicia on Fear, who was more or less forced to grow up after losing absolutely everyone she loved in four seasons of the show.

As AMC works on bringing an entirely new Walking Dead series to life, we'll be here patiently awaiting more details. Who will be in the cast? Will there be any crossovers we're not expecting? Will we ever see Rick Grimes again? There are many questions to be answered, so don't mind me while I sit here and wait for them to manifest.

The third Walking Dead series is set to premiere on AMC in 2020.