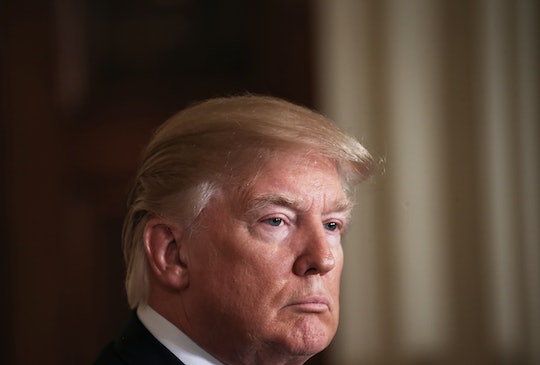 According to NBC News, White House lawyers are currently "working on a rewrite" of Trump's executive order that could "pass a legal muster." This comes on the heels of the announcement from Thursday, that a federal appeals court ruled that Trump's ban on travel into the United States from seven different countries should not be reinstated, according to The New York Times. Shortly after the ruling, Trump tweeted that he would "see you in court" — which means he would presumably be seeing the ban in front of the Supreme Court, according to CNN. But a little less than 24 hours later, Trump reportedly had a change of heart. As of early Friday evening, according to CNN, Trump is currently not planning on appealing yesterday's decision to the Supreme Court. And instead of appealing the decision to the Supreme Court, White House lawyers would be rewriting the immigration order, according to NBC News. Although it is a bit unclear as to what that might entail.

According to NBC News, Trump's legal team believes it will "eventually be proven correct on the merits of the current executive order" and that they're looking into "working on language" for the new executive order that will "find favor with the federal courts." According to CNN, a rewording could reportedly state that the ban does not apply to "legal permanent residents." But whether that is a rewording of the current ban, or scrapping the current order altogether for a new one — is something that will have to be announced with the re-written order. According to The Associated Press, Trump said he was hoping that the outcome of this re-write would be fast, "for reasons of security" but that he "would likely change very little" from his first order. According to The Associated Press, it is likely that Trump will act on this, this upcoming Monday or Tuesday.

According to Time, on Friday Trump hinted that he would be making a decision about additional security measures next week, although those measures are unclear at this time as well. "We'll be doing something very rapidly having to do with additional security for our country," Trump told Time on Friday.

Whatever may come from the re-write or additional security measures, next week will definitely be a surprise — because Trump wants to keep it that way. Trump told reporters aboard Air Force One about the new order, according to The Associated Press, "I'd like to surprise you." Trump's decisions next week — whether he plans to appeal the ban to the supreme court or if and how he chooses to reword the order — will definitely be a surprise, indeed.