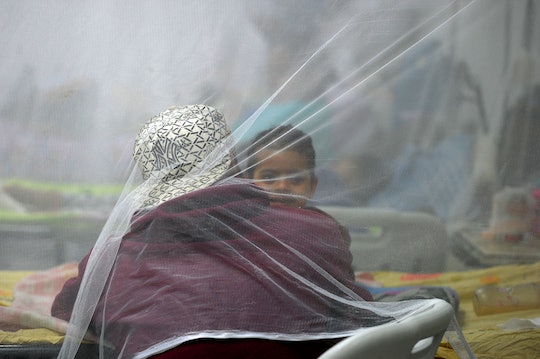 What Will Zika Do To A Toddler? There Might Be Reason To Worry

The Zika virus first hit the collective public freakout radar when the link between the mosquito-borne virus and a crippling birth defect called microcephaly was suspected (and eventually confirmed) in Brazil. But, as outbreaks continue and the U.S. prepares to also be hit by the Zika virus, the news seems to be going from bad to worse. While it was first thought that adults were at low risk for major Zika-related complications — as well as children who contract the virus after birth as opposed to in utero — the most recent research seems to suggest that Zika can cause some significant neurological damage. That means that, while pregnant women and women planning on having children were already pretty worried about Zika, parents of toddlers and older children are now becoming concerned as well. What will Zika do to your toddler? Scientists don't know for sure — and that's not very reassuring.

According to NBC News, recent Zika studies have shown that, unlike a similar virus called dengue, the Zika virus appears to have a preference for specifically targeting (and damaging) brain cells in people who contract the virus. In small lab tests using stem cells, researchers found that the virus could actually kill immature neurons, which is something that hadn't been expected. And doctors in Brazil are also suspecting that the Zika virus is responsible for cases of acute disseminated encephalomyelitis (ADEM), a temporary disorder similar to multiple sclerosis, where the protective myelin sheath surrounding neurons in the brain and spinal cord is damaged.

More research on the connection between Zika and ADEM still needs to happen, but another neurological issue that has been well-established is that between Zika and Guillain-Barré syndrome (GBS). According to the Centers for Disease Control, GBS is an illness of the nervous system, where the body's own immunity attacks the body's nerve cells, which can result in paralysis. While the paralysis is most often temporary, it can sometimes be permanent, and in severe cases where the paralysis affects breathing, Guillain-Barré can lead to death.

The hopeful news — at least for now — is that it is still believed that the risk of complications for those other than the fetuses of infected pregnant women are still relatively low, and that most people who contract Zika will be completely asymptomatic. But the downside of that, even, is that transmission will be harder to contain, given that Zika can also be spread between male and female sexual partners, according to CNN. And, if you don't know you have virus, you might not be as inclined to use protection to avoid passing it on to your partner.

So what can worried parents of toddlers do to keep their little ones safe from neurological side effects? While there is no sure-fire way to prevent Zika completely, measures like avoiding travel to places where Zika is already a problem, and continued use of bug spray as the temperatures rise in their home states, will be essential. According to the CDC, "most EPA-registered insect repellents can be used on children aged 2 months or older," which means that almost all children can benefit from that form of protection. Wearing long sleeves and pants to cover exposed skin is also important when appropriate, and staying inside an air conditioned building where window screens are present is also a valuable prevention measure.

And since the proliferation of mosquitoes only makes the threat of Zika more pronounced for everyone, getting rid of standing water in plant pots, garbage cans, kiddie pools, or anywhere else where water can collect will help prevent mosquitoes from breeding, keeping everyone's children safe.