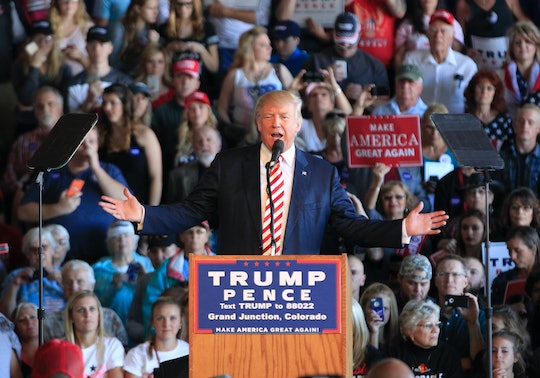 What Would Donald Trump's Nuclear Policy Be If He Were President? It's Majorly Concerning

Democratic presidential nominee Hillary Clinton has often criticized Republican presidential nominee Donald Trump for his temperament, arguing that he's too reactionary and too easily baited to be President of the United States. On Tuesday, Clinton's team reiterated this idea by tweeting a video highlighting comments Trump allegedly made about wanting to use nuclear weapons, and honestly, it was pretty scary. But the video didn't quote Trump directly, and his team has refuted the story, according to The Huffington Post. What would Donald Trump's nuclear policy be if he were president? He hasn't been entirely clear about his position, but based on what he has said over the course of his campaign, his view should still concern voters.

The Clinton campaign's latest anti-Trump video tweet was based upon footage of MSNBC Morning Joe co-host Joe Scarborough alleging back in August that Trump had once repeatedly asked foreign policy experts why he couldn't use nuclear weapons if the United States had them. In the clip, the message Clinton is trying to send seems pretty clear: Trump doesn't appear to understand the seriousness of nuclear war. But Trump's campaign chairman Paul Manafort denied that the exchange took place, saying, according to The Huffington Post, “the idea that he’s trying to understand where to use nuclear weapons? It just didn’t happen. I was in the meeting, it didn’t happen.”

Whether Scarborough's claim is accurate (as Snopes pointed out, at best, it's second-hand information, since Scarborough wasn't privy to the meeting itself), Trump has made a number of remarks about nuclear weapons on the campaign trail. And given the potential for unthinkable destruction, Trump's nuclear policy is not something voters should ignore: As President Dwight D. Eisenhower explained in 1957 according to The New York Times, “You just can’t have this kind of war. There aren’t enough bulldozers to scrape the bodies off the streets.”

During the first presidential debate in September, Trump stated that nuclear armament is the "single greatest problem the world has" and that "nuclear is the single greatest threat," according to NBC News. He's also made a point to say that he would be the “last to use nuclear weapons," as president, according to TIME, and that "it’s a horror to use nuclear weapons.” But the real concern about Trump's nuclear policy isn't even about whether or not he would use them, but the fact that he appears to be in favor of arming other countries.

According to CNN, Trump has criticized the United States' "weak" position protecting other NATO countries like "Japan and Germany and Saudi Arabia and South Korea," whom he says owes the United States "tremendously." In the case of Japan, for example, he even suggested that the country should "defend itself" against North Korea using nuclear weapons, adding that nuclear proliferation in Japan was "going to happen anyway." In fact, in a televised town hall in Wisconsin in March, Trump told the crowd, according to CBS News,

Whether you agree with Trump's position, there's no doubt that his policy is hugely radical, and highly controversial. For decades, the United States has actually focused on minimizing the global proliferation of nuclear weapons — aka, the exact opposite of what Trump is recommending — and it's made a big difference. According to Politico, 23 different countries "had weapons or were pursuing [nuclear] programs," in the 1960s, but now only nine do. What's more is that the U.S.-led Non-Proliferation Treaty (supported by former presidents John F. Kennedy, Lyndon Johnson and Richard Nixon) "is widely considered one of the most successful security pacts in history," with literally every country participating "except for Israel, India, Pakistan and North Korea."

In other words, a Trump presidency could signal a whole new direction in terms of nuclear policy, and it would have global implications that could be potentially disastrous. And it's important to consider that the long-standing position of the United States has been that the safest approach to avoiding nuclear war is to minimize the number of countries who have access to nuclear weapons in the first place. After all, as The Atlantic noted, "the more countries have nuclear weapons, the more opportunities there are for nuclear war to break out, whether by design or by accident."

But, perhaps unsurprisingly, Trump doesn't appear to be too worried about that either. In an interview with GQ in 2015, Trump said the key to ensuring safety would ultimately come down to strengthening the United States military and his own leadership skills:

I wouldn't be nuking anybody ... I will have a military that's so strong and powerful, and so respected, we're not gonna have to nuke anybody. [We] wouldn't get rid of the weapons. Because you have so many people out there. But I would be somebody that would be amazingly calm under pressure.

There are obviously a lot of issues at stake during this presidential election, and sometimes it can be difficult to really discern exactly where the candidates stand on the issues. But Trump's comments on nuclear proliferation are too important to ignore, even if they aren't always dominating the headlines.