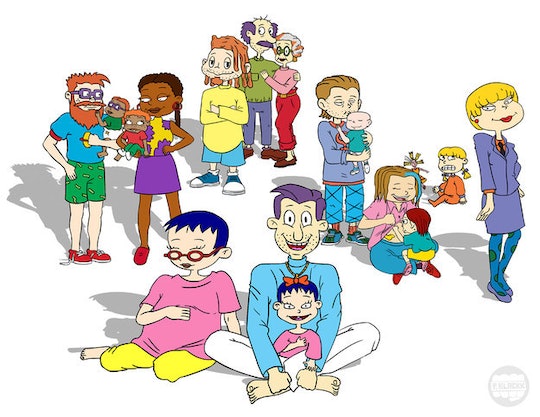 What Would The 'Rugrats' Babies Look Like As Adults? Now We Know, & It's Amazing — PHOTOS

For the majority of us '90s kids, Rugrats was a pivotal television show of our childhood. We loved going on adventures with Tommy, rooting against (or possibly with, because honestly, who doesn't love an adorable villain?) Angelica and her evil schemes, worrying alongside Chuckie, and wishing Reptar was a real thing. The final episode aired June 8, 2004, after 13 magical years of wayward escapades, but that doesn't mean we stopped thinking about the DeVilles, the Pickles, or the Finsters. And now that some of us '90's babies are having babies of our own, we (OK, I) can't help but wonder, "What would the cast of Rugrats look like if they were parents?"

Thankfully, the forever-creative crew at BuzzFeed has the answer. They've provided us with in-depth descriptions of the Rugrats cast's grown up lives, and some straight-up rad illustrations,that give us a glimpse into the potential lives of our favorite diapered, toddler gang. From crunchy moms who are breastfeeding their 3-year-old to CEOs to YouTube stars, one thing is for certain: The Rugrats crew didn't ditch their imaginations or their drive when they ditched their diapers.

More Like This
These Patriotic Puns Are Perfect For The 4th Of July
Why Babies Love Water, According To Experts
13 Going on 30 Is Just As Sweet & Funny As You Remember — And Kids Will Love It Too
You’ve Probably Been Pronouncing “Lilibet” All Wrong