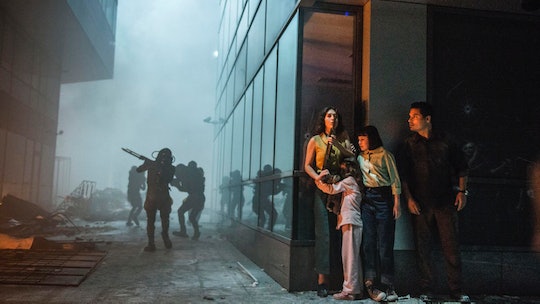 There’s nothing I love more than a good alien invasion, and Netflix’s new film, Extinction, promises just that. The story follows a young family trying to survive the an apocalyptic attack, while realizing how little they actually know about their world. Aesthetically, the movie looks sleek and modern, but with what year does Extinction take place in?

The movie doesn’t reveal the exact year it takes place in, but it does make clear that it's sometime far into the future, at a time when you can't tell the difference between robots and humans. The film stars Ant Man and Narcos actor Michael Peña as Peter, a man who lives a seemingly normal life with his wife, played by Emmy-nominated actress Lizzy Caplan, and his two young daughters. But Peter is plagued by weird dreams that hint of an invasion of some sort, and eventually, when an aliens do begin to invade his home, he realizes that he has been seeing the future. The film also stars Luke Cage’s Mike Colter as Peter’s boss, and Happy Death Day’s Israel Broussard.

Even though Extinction is an exclusive Netflix release, it still has a big production feel — probably because it was originally produced by Mandeville Films and Universal Pictures, the production house behind blockbusters like Beauty and The Beast, Allegiant, and Warm Bodies. The script comes from writers Spenser Cohen, Brad Kane, and Eric Heisser, who also wrote the screenplay for Arrival, Hours, and Final Destination 5.

Extinction was initially scheduled as a January 2018 theatrical release through Universal Pictures, according to Variety, but two months after it was dropped from the schedule, Netflix swooped in to buy the rights to the film. But it’s not the first time the streamer dove in to save a sci-fi thriller. Last year, Netflix paid more than $50 million to Paramount for J.J. Abram’s The Cloverfield Paradox, according to The Hollywood Reporter, which was also originally scheduled for a theatrical release.

In an interview with Meaww, Extinction director Ben Young talked about how the story initially compelled him. “It was one that caught my eye, specifically because it was a science fiction film. It had all of the action and the thrills and spills that you'd expect from the genre but also, at its core, was about something which I think is really important and relevant to the world we're living in at the moment."

Without giving away any spoilers, I can tell you that while Extinction may look like a typical alien invasion story, it really isn’t. There is a huge twist halfway through the movie, and it really gives some perspective on how humans perceive and utilize technology.

In some futuristic movies, the date and place are spelled out on screen, which can help give the audience a frame of reference to work with. But even without an exact date for the alien invasion in Extinction, the film still manages to create a context of time with its portrayal of what a distant (and terrifying) future could look like. If you’re a fan of all thing aliens, space, and robots like me, it may be worth a weekend watch.