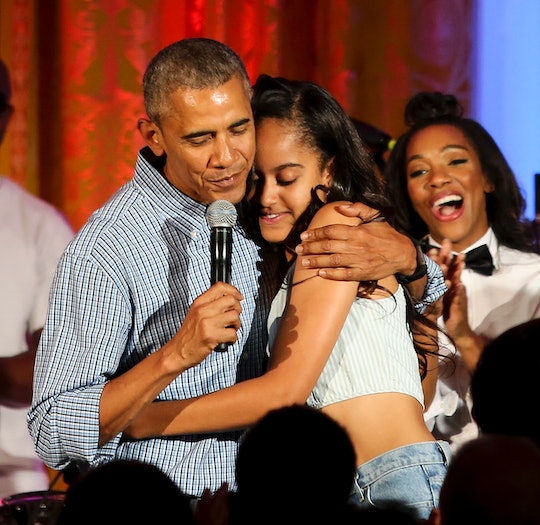 Malia Obama Is Approaching A New Year At Harvard Soon

Life after the White House has been exciting for Barack and Michelle Obama. The couple recently celebrated daughter Sasha Obama's high school graduation, and it sounds like they're gearing up to ship her off to college. Sending a kid to college is undoubtedly difficult, but it's not their first rodeo. Their older daughter Malia Obama is already well into her college career, and reports suggest that she's been thriving at Harvard University. But what year is Malia Obama in college and has much been shared about her life at Harvard?

The former president's first daughter started her second year, aka sophomore year, at Harvard in August 2018, according to Vanity Fair, meaning she'll be a college junior in August 2019 when classes start up again. Per Harvard's academic calendar, she completed her classes around May 24 — the same time her little sister, Sasha, attended prom — and should she continue her studies at the prestigious university, classes for the new year start up again on Sept. 4.

As for what she's studying at Harvard, Malia hasn't confirmed her major at this time, and neither have her parents. Both Barack and Michelle Obama studied law, but Malia hasn't yet indicated whether or not she intends to follow that same path. Some speculate, however, that she'll go on to study something in the vein of entertainment. As Page Six reported in 2017, she interned with disgraced Hollywood producer Harvey Weinstein and has attended both Lollapoalooza and Sundance Film Festival, though the latter two may have just been for fun. Malia also worked on the set of HBO's Girls, according to Page Six.

Around the same time, according to E! News, the 44th president said that he encouraged Malia to explore her options when it came to college. According to People, he told his eldest daughter "not to stress too much" about getting into particular schools, stressing to her, and the general public, that Ivy League colleges weren't the only ones that could offer her a great education. "Just because it's not some name-brand, famous, fancy school doesn't mean that you're not going to get a great education there," Barack said at the time.

In the end, however, she opted for Harvard over her other options, which included Stanford, the University of California, Berkeley, New York University, Tufts, Barnard, and Wesleyan, according to The New York Times.

Malia appears to be enjoying her time at college and hopefully she can offer little sister Sasha some advice before she ships off to her own school in the fall. As for Barack and Michelle, they'll have to lean on one another as they deal with being empty nesters for the first time. Surely they'll get through it — they got a taste for it two years ago when they sent Malia off to Cambridge, Massachusetts for her first year of college.

More Like This
Teacher Shot By 6-Year-Old Student Told School He Had A Gun, Was Told To "Wait"
Michigan Right-Wing Group Wants To Erase LGBTQ+ Sex Ed
10 Great Podcasts That Will Keep Your Kids Entertained On Your Next Family Road Trip
Sheryl Lee Ralph's Husband & Kids Are Her Biggest Cheerleaders
What Parents Are Talking About — Delivered Straight To Your Inbox