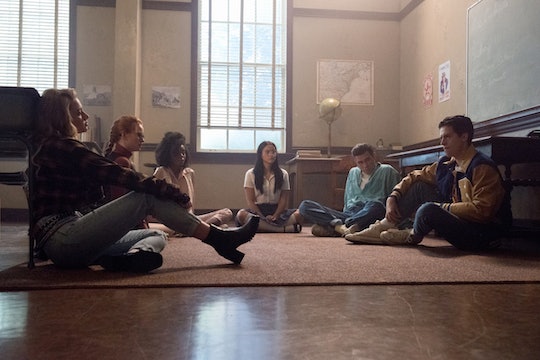 The 'Riverdale' Gang Is Travelling Back To The '90s

Riverdale fans are getting ready to go back in time with this season’s highly anticipated flashback episode. Titled “The Midnight Club” — as a tribute to the ‘80s cult classic, The Breakfast Club — the episode will transform Archie and the gang into high school versions of their parents. It will be exciting to see the crew in all that vintage glory, but exactly what year is the Riverdale flashback episode set in?

While the exact year hasn’t been disclosed yet, the episode is confirmed to take place in the early ‘90s. In a promotional photo for the episode from the CW, you see teen versions of Alice (Lili Reinhart), Penelope (Madelaine Petsch), Sierra (Ashleigh Murray), and Hermione (Camila Mendes) discussing something in the school’s bathroom. The words “End Apartheid” are scribbled in lipstick on a mirror behind them, signifying that it probably takes place between 1990 and 1994, the final years of the anti-apartheid movement.

For fans, diving back into the high school lives of the Riverdale parents should answer some questions. Like why did Alice Cooper leave the Southside Serpents, and what exactly happened between her and FP back then? According to The Wrap, during the Television Critics Association press tour, showrunner Roberto Aguirre-Sacasa said that the flashback episode will unearth some secrets and reveal the parents’ backstories. “Throughout the years, we’ve talked a little bit about backstory and we’ve been revealing backstory slowly,” he said. “We are doing a big flashback episode — And we’re going to learn about a really, really dark secret in Riverdale that the parents have been keeping since they were in high school.”

Hopefully, the flashback episode will also drop some clues on one of the season’s biggest mysteries. Both Dilton Doiley (Daniel Yang) and Ben Button (Moses Thiessen) are dead as a result of playing a dangerous game called Gryphons and Gargoyles, possibly murdered by someone who Dilton called the “Gargoyle King.” Betty and Jughead are sleuthing around to uncover the truth, but when they confront Ethel (Shannon Purser)— who is also playing Gryphons & Gargoyles — they find themselves in the middle of this deadly situation.

The true nature of the game, and the identity of the Gargoyle King is still a mystery, but Aguirre-Sacasa told Entertainment Weekly that the flashback episode will help connect some dots. “The murder victims in the present were playing a game called Gryphons & Gargoyles, which is, of course, the Riverdale version of Dungeons & Dragons,” Aguirre-Sacasa told EW. “Our kids discover that when their parents were in high school they also were playing this game, and there was a similar murder that happened in the past.” If the adults played Gryphons & Gargoyles in high school, there may be a possibility that the killer is from their generation, but fans will have to keep watching through the season to find out.

As a ‘90s kid and a huge fan of John Hughes films, I’m excited to see the Riverdale gang in their retro style, and the icing on the cake will be The Breakfast Club star Anthony Michael Hall's cameo as Principal Featherhead. The young actors will channel younger versions of the actors who play their parents, and from the trailer for the episode, you can see that KJ Apa has completely transformed into a 90210 version of Luke Perry, and Cole Sprouse eerily reminds you of Skeet Ulrich circa Scream and The Craft. Hopefully, the flashback episode clarifies the Riverdale parents’ dynamics, along with dropping clues about the person behind this season’s murder spree.

“The Midnight Club” episode of Riverdale premieres on Wednesday, Nov. 7 at 8 p.m. ET on the CW.