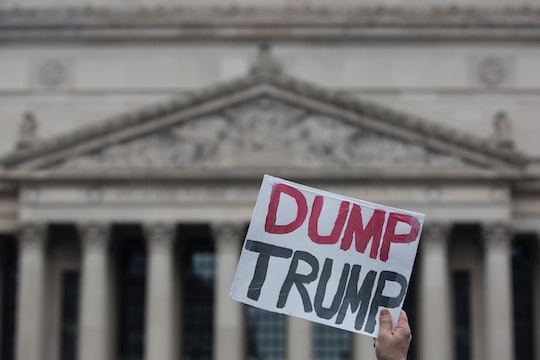 Here's How You Can Keep Trump From Hurting America

As of 12:01 p.m. Eastern Time on Friday, January 20, Donald J. Trump became the 45 President of the United States — and there's no going back. There's no election night mulligan, no frontsies-backsies on the peaceful transition of power from one president to the next. From now on, and until at least Nov. 3, 2020, the man who hosted Celebrity Apprentice is the leader of the free world. And for millions of Americans, Trump as our nation's president is a terrifying reality. It is understandable to have woken up this morning feeling worried, scared, or even depressed — but now that Trump is officially in office, it's time to get to work, folks. It's more important than ever that to find out what you can do right now to keep Trump from making a negative difference for America.

On the campaign trail, Trump lashed out against Muslims, Mexicans, the disabled, the press, and women. After he was elected, Trump's cabinet appointments have turned out to be a motley crew of billionaires and millionaires who deny climate change science, support anti-LGBT legislation, seek to take away health insurance from millions of Americans whose literal lives depend on it, or have no experience for their appointed position at all. It's time to roll up our sleeves and get to work, people.

First and foremost: Are you registered to vote? Midterm elections are in two years, people. Get registered if you haven't. If you're still too young to register to vote, put it on your calendar now to make registering to vote the very first thing you do on your 18 birthday.

Maybe you don't have the time to volunteer for a congressional campaign. That's cool. What you can't contribute in time, think about contributing in cold hard cash to the causes that are important to you. In the days following the election, both Planned Parenthood and the ACLU saw donations spike. Pick the cause that's most important to you, or your top two or three causes and make a donation right now. Or, if you can swing it: Set up a recurring donation amount to those causes today so you know that you're making an impact every day of Trump's presidency.

The time for mourning is over. It's time to act. Today America may have just inaugurated its most inexperienced, troubling president yet — but let's also not forget that today is Friday and yes, it's a workday. And boy oh boy, there is work to be done — so let's get to it, America.

Our time is now.