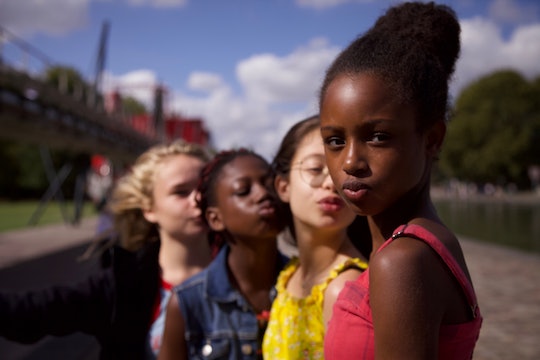 What You Really Need To Know About 'Cuties' On Netflix, According To A Mom Who Watched

If you haven’t seen Netflix’s original promotional art for Cuties, imagine if WAP were a movie poster. Skimpy outfits, popped booties, spread legs, and suggestive kneeling... but instead of grown women, you're looking at four 11-year-old girls. The image is jarring and deeply uncomfortable, and prompted an immediate flurry of petitions for Netflix to cancel this MA-rated film’s September 9th release. But here’s why I watched Cuties, and why I’ll be recommending it to everyone I know.

More Like This
Here Are 33 Movies For Kids That Aren't Cartoons
Kids Can Read For A Free Personal Pizza This Summer — Just Like You Used To
Vaccinated People Can Ditch Masks. Where Does That Leave Kids?
Apple Card Family: How It Works & What Your Kids Can Learn

The image of hypersexualized children, looking as though they were starring in Hustlers II: Electric Boogaloo, was in and of itself upsetting. Certainly the original description (which, like the poster itself, has since been changed) did not help matters: “Amy, 11, becomes fascinated with a twerking dance crew. Hoping to join them, she starts to explore her femininity, defying her family’s traditions.” Like the visual language of the poster, this verbiage is familiar. But key to the “sexuality as empowerment” narrative is a person who is empowered to be sexual. An 11-year-old is most definitely not. It is no surprise people bristled upon seeing this: I certainly did, and I was very ready to be very, very angry.

I discovered Cuties (Mignonnes in the original French) as I discover most everything: on Twitter. I scrolled through similarly scandalized reactions. Gifs of monkeys throwing keyboards (“That’s enough internet for one day!). Emojis and memes conveying weary disappointment. Righteous anger about the sexualized adultification of Black and brown girls. Rants in all caps about grooming and pedophilia. SaveTheChildren hashtags. Links to the Change.org petition. But then I started to see other comments, urging people angry at the poster to watch the trailer, Google the director, and note the film is based in part on her short film Maman(s) which won the Short Film International Fiction Jury Award at the 2016 Sundance Film Festival. Yes, they said, this image is inexcusable, but it does not represent the art.

So I did. Then I asked Netflix for a screener. For an hour and a half I watched in rapt attention, speechless and heartbroken, not because this movie exploited young actresses, but because the movie painfully and beautifully showed what young girls today are up against.

The film is the debut feature from French-Senegalese writer and director Maïmouna Doucouré. It’s about 11-year-old Amy, an immigrant living with her mother and two younger brothers in a poor neighborhood in Paris as they await the arrival of their father from Senegal. When news arrives that the father has taken a second wife and will be coming back to the family with her, Amy watches her mother crumble under this decision, torn between her own feelings and community pressure to be a dutiful wife. It is against this backdrop that Amy finds herself drawn to a clique of girls in her class who call themselves “The Cuties,” who are obsessed with pop culture, social media likes, and winning a local dance competition. The Cuties’ ideas about growing up, which comes entirely from a shallow understanding of what they see online, stand in stark contrast to the path laid out by Amy’s older Auntie — prayer, cooking, caring for her family, and, eventually, marriage.

The cautionary message in the film could not be more clear: “becoming a woman” is something that is learned, and while 11 is a normal age for girls to start becoming curious about what that means, the answers they’re receiving from society are anything but. The disconnect between knowledge of sex — the girls are laughably naive about what it even is — and their ability to perform sexuality as they see it performed in the world around them is intentionally unsettling. The young actresses, who give incredible performances, go back and forth between childish, age-appropriate activities (coloring, jumping on beds, eating too much candy, skipping rope) and horrifyingly inappropriate ones (gyrating, watching porn, dressing in provocative clothing). These, the film assures us, are understandably clueless children receiving dangerous messages about what it means to be grown-up. Even more troublingly, much of what they’re doing is cheered on by a large segment of society… until it isn’t, and the slope to that point is a slippery one.

The film is beautiful, but even so it is not an easy watch. The themes are upsetting, and Doucouré does not shy away from showing just what brand of performative sexuality girls today are emulating and how they’re doing it. I found myself, a mother of a 6-year-old girl growing up in a social landscape I never could have imagined at her age, wondering how I can keep her from all this? How much longer until I can’t? How do I explain to her that social media is not reality, even as it becomes more and more a part of her reality? How can a fretful mom’s worry possibly compete with the siren song of peer approval that comes from growing up too fast?

In an interview with IonCinema at the 2020 Sundance Film Festival, Doucouré says the inspiration for the film came when she watched a children’s recital in France. She was shocked by the provocative dancing and dress of the little girls on stage, and found the contrast with the conservative, traditional Muslim dress of the parents in the audience particularly interesting. Distressed by the inappropriate behavior she saw, she sought to understand what was prompting it. Doucouré spent more than a year and a half interviewing girls (with their parents permission). Her interviews led her to realize the allure of social media attention and the damage it can do. While the film leaves no doubt as to her opinion of hypersexualizing girls, she explicitly states in the interview that she hopes this movie will help to combat what she sees as a grave societal ill. “We can’t continue to close our eyes about that,” she says. “It’s important to see the reality and to act to change the situation.”

Cuties is not the movie the Netflix poster initially promoted. But first impressions, as they say, are the most important, and unfortunately the damage has been done: a film exploring a pervasive problem in society has been tarnished by a marketing strategy that perpetuates the very problem the movie fights against. Whether this was an egregious misstep or an intentional stunt born from the idea that “there’s no such thing as bad publicity,” I don’t know. But I do know that the decision has caused many people who should see this movie, people who are deeply concerned about raising girls growing up with social media, to write off Cuties as debauched kiddie-porn. (Already heightened conspiracy theories and rampant misinformation about child trafficking certainly do not help matters.) A promising young Black, female director, with a sharp eye and remarkable ability to tell a story, has been on the receiving end of threats and angry social media campaigns.

But Cuties is a beautifully crafted movie about the reality of being a girl of a particular age in this particular age. It’s an exploration and a call for change. Our girls are becoming lost, but it’s not too late to see them and let them know there are more and better choices for them than they realize. This film will stay with me for a long time and broke my heart in a way that it needed breaking — a heartbreak that, in its wake, leads to something better and more hopeful on the other side. I’m so glad I looked past my initial disdain, and I hope others will, too.