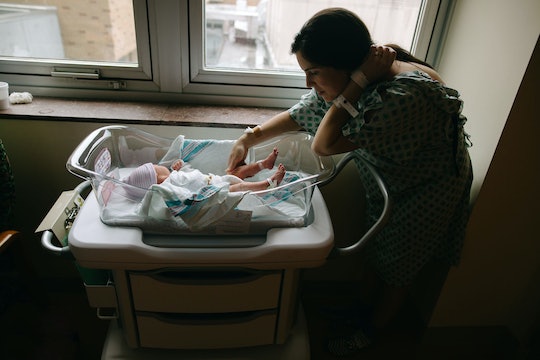 Does Your First Labor Determine How Your Second Will Go? Not Exactly

My oldest child was born three days after I experienced my first contraction, and her birth was so easy (from the doctor’s point of view, not necessarily from mine) that a newbie resident caught my daughter while the doctor was playing on the computer (not an exaggeration). Fast-forward to my second daughter, who was sunny-side-up (her head was up rather than down), she was huge (8 pounds, 5 ounces inside my slight body) and she was as stubborn during her birth as she is today, 7 years later. While I expected an easy, somewhat fun and relaxed delivery based on my first labor, my second was anything but chill. So was my experience an anomaly? Or can you use your first birth as a learning experience for subsequent births?

Studies have found that you can expect some changes when it comes to your second pregnancy and birth, though every pregnancy is different.

For example, the average first pregnancy lasts for 41 weeks and one day, while subsequent pregnancies average 40 weeks and 3 days. Does that mean that your second pregnancy will fit the mold in terms of the length of time?

Don’t schedule your Uber to the hospital just yet.

“Every birth is a little different, just like every baby is different,” said Emma Grabinski, medical director at Swedish OB GYN Specialists in Seattle tells Romper. “It’s most common that the first delivery is the hardest, as it’s uncharted territory, and typically the second baby will be delivered a little earlier than the first — it’s not unusual to go past your due date a little with your first baby, but less common with your second.”

The second delivery is usually faster than your first as well: the dilating and the pushing, Grabinski says.

So sometimes, what happened in your first delivery affects your second (this isn’t Vegas, apparently). A study published in BJOG found that if you had a perineal tear during delivery, then you have an increased risk of severe perineal tearing during subsequent deliveries.

Also, 90 percent of women who have a c-section will have one for subsequent births.

Had preeclampsia? You *may* have it again. Or maybe not. Studies show that if you had it at the end of your pregnancy, then it’s not a big deal — you only have a 13 percent of it recurring in your next pregnancy. But if you had severe preeclampsia before 29 weeks, you have at least a 40 percent chance of it returning, according to the Society of Maternal-Fetal Medicine.

Gestational diabetes is another factor that doctors can sort of predict. If you had it in your first pregnancy, there’s a 45 to 60 percent chance that you’ll have gestational diabetes again, states Dr. Chris Iliades for Everyday Health.

But there are so many variables in pregnancy and labor that are difficult to predict (though obviously we try).

After laboring for 29 hours while comfortably working with clients when she was pregnant with her first child, Anna Steinfeld of the Chicago-area assumed she’d have a similar second experience — but she couldn’t have been more wrong.

We took a nap, got woken up a few hours later, and after three easy pushes, Asher was born.

Fierce contractions that started out of nowhere sent her straight to the hospital with baby number two, and she barely made it to the delivery room. In fact, Steinfeld’s husband missed the birth and didn’t get to cut the cord.

Fast-forward three years, and Steinfeld was pregnant with baby number 3, who was being stubborn. She was wandering miles through Chicago to try to jump-start her labor. Contractions began gradually, and gave her enough time for Steinfeld’s mother to come over and watch Steinfeld’s older two boys while she and her husband left for the hospital.

“Everything was unbelievably calm and smooth,” Steinfeld says. “We took a nap, got woken up a few hours later, and after three easy pushes, Asher was born.”

She categorizes the three births as: Slow and painful; lightening speed and extremely painful; and just right and blissful.

But while Steinfeld laughs today, describing her births as the classic “Goldilocks story,” it’s not so funny when you’re pregnant and dreading a second birth because you assume the baby will be 11 pounds like his older brother, or will be two weeks late, like his older sister.

Surely, with all the science we have within reach, we can predict a little more (we can send a man to the moon, but we can’t determine an accurate birth weight, even with prior evidence?).

Birth weight based on birth order has very little data and it’s not clear what the implications are, says Shieva Ghofrany, an OB-GYN with Coastal Obstetrics/Gynecology in Stamford, Connecticut.

“There have been a few studies looking at birth weight in ensuing babies, but overall there may be evidence that the second baby will be about 5 ounces bigger than the first,” she says. “However, when the data went into detail with socioeconomic status and interval between pregnancies, it was harder to predict — lower socioeconomic status meant more chance of diabetes leading to larger babies but also hypertension which could lead to smaller babies, and short intervals between pregnancy like less than one year led to possible growth restriction, meaning the number of variables is vast and changes the outcome.”

Translation: Don’t hedge your bets when it comes to your second, even if there are a few measly stats that might point you in the right direction. When it comes to pregnancy, labor and delivery, it appears that you have to arrive prepared for just about anything.

“When all is said and done,” says Kecia Gaither, OB-GYN and maternal fetal medical specialist at NYC Health and Hospitals/ Lincoln, “the best predictor of pregnancy outcome is determined by early and consistent prenatal care.”

But just like children, births are a huge surprise. Every. Single. Time.