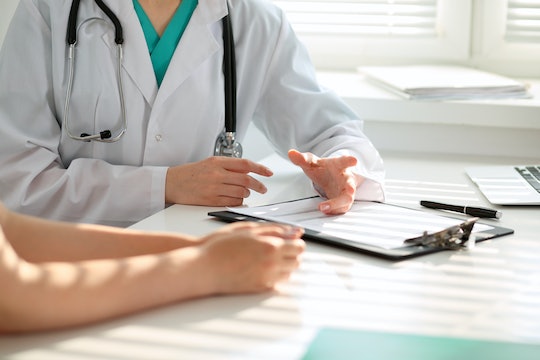 What Your OB-GYN Wants You To Know About Postpartum Depression

Pregnancy and motherhood can be very isolating. You're expected to be this perfect bastion of all that is good in the world, even if it feels like you're barely holding it together. But you're not alone — and there's help. For some moms, it can be uncomfortable or scary to talk about how you're feeling with your doctor, but what your OB-GYN wants you to know about postpartum depression can give you the courage and strength to reach out.

Postpartum depression (PPD) is common. According to the Centers for Disease Control and Prevention, one in nine women experience some form of PPD in the first year after a pregnancy ends. It's even more common in women in low-income environments, or women who are the victims of domestic abuse, according to the Primary Care Companion of Central Nervous System Disorders. It's also more common in women who have a history of anxiety or depression prior to becoming pregnant, or women who have given birth to premature babies or babies with genetic disorders.

But just because it's common doesn't mean it's easy to talk about. It doesn't mean that you won't feel shame (even though you shouldn't), it doesn't mean you won't be confused or scared or anxious about your feelings. It just means that you're not alone in these emotions. It means that there are others who have gone through it, and experts who can help you get the assistance you need to get better.

I spoke to Dr. Jennifer West in California about what she wants her patients to know about PPD, and she had a lot to say. "I want women to know that it's valid, and it's not always just 'the baby blues.' If you're feeling really depressed, or you're having thoughts you know you shouldn't be having, you should tell your doctor right away," she tells Romper in a phone interview.

West also wants to make sure that women know it's not just women who've given birth who experience PPD. "Women who have suffered a miscarriage or women who've terminated a pregnancy can also experience postpartum depression. I've noticed that women who've chosen to terminate after finding out that their fetus isn't viable are especially given towards depression." She says that women in these circumstances may feel like they're not allowed to be treated for PPD, or that somehow it should affect them less, but that they are no less valid in their condition than a woman who has given birth to full-term twins.

And sometimes with PPD, it may feel like you're losing your grip on reality — and that's especially dangerous, according to West. You may have thoughts of self-harm, or harming your baby. Wild thoughts. Things that would normally never occur to you are now a part of your quotidian existence. Get help. Talk to your partner, your doctor, a friend. If your doctor isn't helpful, find another one. If you need to, go to the emergency room — don't be ashamed that you need help. Doctors are there to help you.

West is also adamant that women know that they did not bring this on themselves. "There is nothing you've done that caused your postpartum depression," she says. "Sometimes, it just happens."

She also tells Romper that you shouldn't feel bullied into one type of treatment or another. "Some women really benefit from only therapy or group therapy or support groups. Some sedentary lifestyle women can talk it out with someone or manage it with diet and exercise. Other women need pharmacological help, but won't go that route because it's contraindicated for breastfeeding. You have to do what helps you first. If you're not OK, it's so much harder for you to take care of your baby. Do what you need to do and don't listen to others who'd sway your choices."

West adds that there are definitely some things that will likely make PPD worse, however. Alcohol, a sedentary lifestyle, and sleep deprivation will all exacerbate the effects of PPD. "Try to aim for at least 30 minutes a day of movement. A walk around the mall, dancing with your baby, a stroll through your neighborhood — if your doctor says you can walk, try to do it," West says. She notes that while sleep deprivation is an expected part of motherhood, if you can, catch sleep as often as possible. It really helps. As for alcohol, while the idea to unwind with a glass of wine after a long day, especially when facing down an interminable night, may seem like pure bliss, in the long run, it's a depressant and it will likely only make things worse. PPD, West says, affects your whole body, not just your mind. Depression can cause headaches, digestive upset, muscle cramps, and lethargy, and alcohol will make those symptoms much, much worse.

As far as when you can develop PPD, West says that it can happen any time in the first year after a pregnancy ends, so don't think that because your baby is 6 months old that your depression isn't linked to having a baby. While delayed-onset postpartum depression is more rare than early-onset PPD, it's not unheard of.

No matter when or how you feel it, if you're experiencing depression, get help as soon as you possibly can. The sooner you get treatment, the sooner you can improve, and that's all that matters. It's obvious that your doctors shouldn't judge you or make you feel ashamed — they are there to help you. You're far from alone, and your health is of paramount importance not only as a new mom, but as a person.