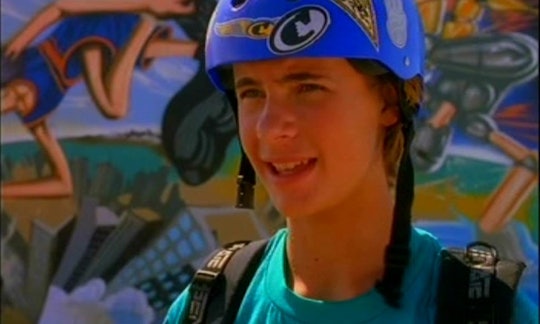 Do you guys remember Josh from The Princess Diaries? You know — the hair, the pout, the rakish grin. Of course, Josh (who I imagine grew up to marry Mandy Moore — I mean, Lana — and now feels really bad about how he treated Princess Mia in high school) wasn't a real person. But the actor behind Josh was and still is very much a real person named Erik von Detten. Once the heartthrob at the center of every teeny bopper magazine published around the millennium, I one day found myself wondering: Whatever happened to Erik von Detten? I knew I couldn't be alone in this, so for the sake of girls everywhere who once plastered their walls with the previously mentioned centerfolds of von Detten, I touched base and set up a phone call for Romper's Claim to Fame. Job perks, am I right?

As for where von Detten is these days, it turns out he's living not so differently from all the other boys I had crushes on when I was 13 years old. He's now 36, working a responsible job in sales, and recently married the love of his life. Oh, and he's still acting from time-to-time by doing local community theatre for fun in his spare time. Who'd have thought?

"My hat's off to actors who are able to maintain a steady career for 30 years," von Detten tells me over the phone and I realize his voice sounds so familiar, like talking to an old friend after a few too many years. As he explains it to me, no matter how talented you are, making a career in that business is going to be a pretty big gamble. Since von Detten knew he wanted to get married eventually and start a family, he quickly realized he was going to need much more consistent work. Enter the commodities brokerage where von Detten now works as a sales manager.

But that's not to say he stopped loving acting, which he still gets to do on his own terms. "I really enjoy acting from time to time [when] I’ve had the opportunity to do it — the neighborhood play and whatnot," he shares, adding that a couple of years ago he was part of a Christmas play in a local theater in Santa Monica. Can you imagine going to your town's local holiday show, only to find that your former favorite teen heartthrob is one of the actors involved? (Note to self: check out Santa Monica's community theatre program next time I'm in California.)

Now, here's a fun fact: the reason why von Detten decided to become an actor in the first place is something pretty relatable. Following in his sister's footsteps, von Detten says he asked his mom what would happen with school if he got into acting. "And she said, 'Well, you wouldn't be able to go to school anymore.' And I was like, 'Oh, okay, sign me up.'" Yep, that sounds about right!

Now, as far as the important questions go, you're probably wondering about that family von Detten mentioned wanting. As far as I could tell he isn't a dad just yet, but he did recently get married in August 2018. When I ask about his wife, von Detten describes her as "beautiful" and "driven," explaining that the couple met a few years ago through mutual friends. (FYI: I did not ask if her foot popped during their first kiss.)

While von Detten didn't end up with a fellow Disney star or actor, it seems as though he overcame whatever bad boy reputation he might have gained for playing Josh Bryant. Slyly, von Detten jokes that playing Josh might have "compromised" his game at the time, adding: "I'm sure there were a fair amount of girls that I was perhaps dating after that point that were probably too quick to judge me as that character." Thankfully, the reputation didn't stick, and von Detten has proved to be so much more mature than any character he's played — especially Josh.

Though von Detten will (sort of) cop to being a very cute teen, he says he's grateful he never got too famous. Like the kind of famous where you can't leave your house anymore. In fact, when I inquire how von Detten perceives himself and his former career, he describes himself as "somewhat famous." He explains, "I never reached super fame, if you will. I was always kind of, under the radar at some extent, and I really enjoyed that actually because I think that if you become too famous I guess, you can’t really even have much of a private life."

So, to answer the question, this is what happened to Erik von Detten: he grew up — just like me, you, and everyone else does eventually — and found his place in the world.