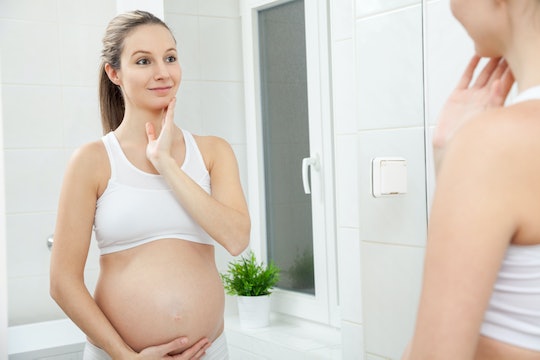 The Changes Your Face, Well, Faces When Pregnant

You know all about the ways pregnancy is going to change your body— your belly's going to get rounder, your hips are going to spread, and your boobs are going to grow. But surprisingly, not all the action is going to take place from the neck down. Your face, for example, takes quite a toll during those nine months. So what'll happen to your face during pregnancy? Quite a few things, actually.

For starters, the American Pregnancy Association noted that the dark spots could be the results of melasma. You may also deal with pimples and blemishes that'll have you feeling like a teenager again. According to Baby Center, pregnancy hormones can cause acne to pop up when you least want them. Unfortunately treating the zits isn't as easy as when you were younger — you have a baby to consider, after all. Make sure to run your skincare routine by your doctor to make sure any acne fighting products you're using are baby safe.

Then there's edema, or facial swelling. Today's Parent noted that the swelling that typically effects your feet, ankles, and legs can also cause your face to swell. If that does happen, keep an eye on it— swelling that isn't going away can be a sign of preeclampsia according to What To Expect.

Even your nose won't necessarily stay the same during pregnancy, according to Glamour. It can also swell up thanks to your hormones, and that can bring with it lots of sniffling and even nosebloods according to What To Expect. This was one of my least favorite things about pregnancy, but I can report that your nose goes back to normal after birth.

It's not all bad news for your face, though. You may very well be one of the lucky moms-to-be who simply has that pregnancy glow. Once again hormones are the cause — they can increase oil production, which can give you a shiny look, and the higher amount of blood circulating through your body can give you a bright complexion. If you're going to have to deal with the all unpleasant side effects of pregnancy, at least the glow can make it a little more fun.