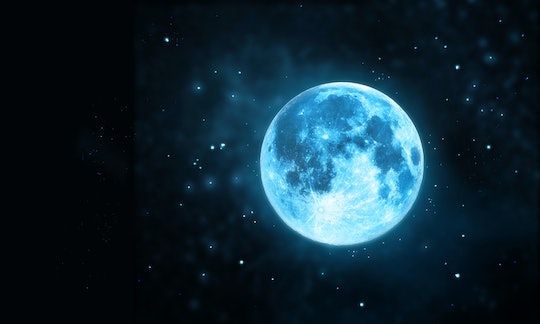 Blue moon, supermoon, blood moon, you'd think we'd all be experts on all these lunar events by now. But if you're anything like me, you rarely get the chance to learn a little more in depth information about one before it passes you by. Well, here's your chance to become an expert on the next celestial wonder we'll witness. So what's a blue moon? These seven cool facts will help you get to know the blue moon before it happens on January 31.

There are actually two definitions for a blue moon, according to Space.com. The original was "the third full moon in a four moon season," but in 1946, Sky & Telescope magazine misprinted the meaning of a blue moon as the second full moon to be seen in one month. For whatever reason, this misprint has actually stuck with the majority of the population. Even NASA defined the blue moon as the second full moon of the month, and the one arriving on January 31 is second to the one on January 1.

On top of that, it's also a supermoon (when the moon is closer to the earth in orbit, making it appear bigger and brighter than usual), and a blood moon (it'll pass through the Earth's shadow and look red), explained NASA.

That's just the beginning of the cool facts you should store away before the main event. Here are eight more pieces of info about the blue moon that are really fascinating.